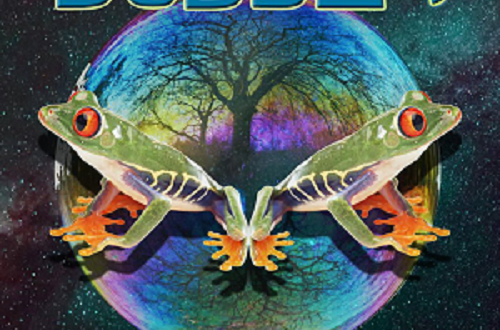 Now known as Meteorange, De Gagne’s latest album release is entitled Bubble 1. The first in an anticipated series of four such releases, De Gagne plays all guitars, synthesizers, mandolin, handles all the special effects, and even contributes dulcimer as well. He makes effective use, however, of two musical guests – Mathieu Leger’s drumming and Francois Boucher’s violin provide important musical contributions to Bubble 1.

The eleven-track instrumental collection opens with the full Bubble suite, presented as intended, in a continuous performance running twenty-three and a half minutes long. It isn’t difficult to decide, early on, that it is the preferred way of encountering Meteorange’s work. Breaking up the suite’s movements into “tracks” is a compromise with the form and illustrates De Gagne’s larger ambitions.

Some may prefer the suite’s movements in isolated tracks. The first of those is the four-minute-long “Tribal Sunrise”. Nature sounds open the track before synths make their entrance. De Gagne introduces a tribal beat, its placement in the mix putting it at a seeming distance, and other percussion drops in throughout the track. “Morning Bird” is much more concrete musically than the ambient opener and Boucher’s violin, in particular, invokes a feeling of renewal and promise.

Transitioning from the opener into the second track/suite is more effective as a continuous work, yes, but don’t underestimate how surprisingly well it fares broken up into distinct cuts for the purposes of the release. It doesn’t feel like the unity of the piece suffers much. The third movement/track “Cosmic Folk” will be a highlight for many listeners. It finds De Gagne turning his musical focus in a much folksier musical direction and its especially notable how Boucher’s playing seamlessly makes the transition from its earlier classical inclinations.

His canvas widens as the track progresses. The violin retreats from its folksy melodies during the song’s first half and, instead, returns to light classical affectations. It is an instrumental album, so when the human voice makes its presence felt in De Gagne’s music, it stands out for multiple reasons. One is how well De Gagne folds its presence into the overall framework of the track. Another reason is the naturalness of its sound. The choral presence in this track pushes into a nearly spiritual plane.

There’s real artistry at work during this release and it demands multiple listens before arriving at any kind of final verdict. Lovers of instrumental music committed to pushing boundaries will embrace this work. Meteorange’s Bubble 1 is more than a promising initial entry in a planned series; it stands on its own as a superior standalone work of musical art.