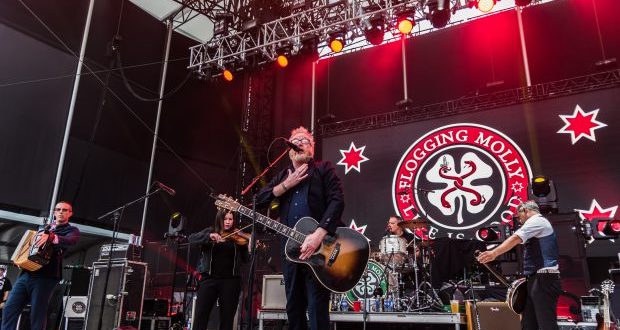 Thursday night before St. Patrick’s Day weekend and the show is packed with fans of all ages including families. The show was originally set to be performed at the Pool at the Cosmopolitan Resort, but due to weather it was moved inside to their concert venue, The Chelsea, and the fans do not seem to mind at all. In fact, many people commented that this location worked better, if less unique. The crowd is packed many already in green leading up to the weekend and the multitude of bars are serving plenty of cocktails.  It is clear the crowd is here to have a good time.

At exactly 10:00 PM the room goes dark and the intro music plays.  All of a sudden the stage is lit up in hues of blue and yellow as Flogging Molly begin their set.  The crowd is jumping so much right from the start that it feels like you are standing on a trampoline.  There is so much bounce that front-man Dave King comments on how the stage is bouncing after their first song and that is going to keep up all night.  King is running around the stage with an intensity that is often missing in other performers.  He takes time to drink Guinness toasting the crowd and interacts with them from the beginning to the very end and this is the same with the entire band.  Accordion player Matt Hensley makes playing the accordion it’s own art form twisting and contorting the instrument and his body.  He and Nathan Maxwell on bass play off of each other on their side of the stage.  On the opposite side, Dennis Casey on guitar and Bob Schmidt on banjo have a similar interaction.  Violinist and tin whistle player Bridget Regan stands in the middle of the stage playing along with a calm elegance.  The overall picture is one of combined energy, intensity, and all around fun.

The set consists of the songs you’d expect and want to hear including “Requiem for a Dying Song,” “What’s Left of the Flag,” “Drunken Lullabies,” “Swagger,” and fan favorite “If I Ever Leave This World Alive.”  The music is interwoven with stories from King about his life, growing up in Ireland and St. Patrick’s Day itself.  It is clear he and everyone in the band are enjoying the party as much as the crowd is. They play at this pace and intensity for the next hour and a half, the crowd keeps jumping and the drinks keep flowing.  Heading into this show everyone was talking about the show and how great it was going to be.  They were right, and if possible they were talking even more about it on the way out looking forward to the rest of the St. Patrick’s Day weekend and the next time they can see Flogging Molly.

13.  If I Ever Leave This World Alive