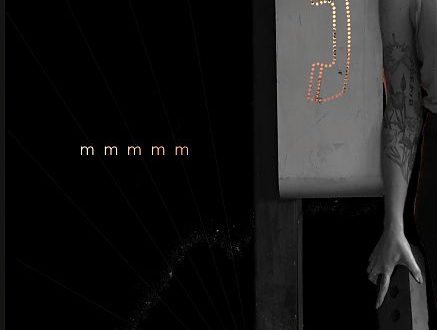 Alberta is the brainchild of singer/songwriter and Detroit native David Boone and his new album MMMMM, self-released, is an eleven song collection attesting to his idiosyncratic artistic nature. Describing his newest release as the explosion of a single thought overall with the individual songs representing shards of shrapnel, it’s clear Boone intends there to be an unifying concept behind the release. This fact is made further evident once listeners launch into the release as Alberta’s songs share certain key aspects of their musical identity centered around the atmospherics and flavor of Boone’s mix for the album. MMMMM’s songs are evocative without ever falling into clichés and driven by compelling arrangements and vocal performances alike.

“Outta My Head” immediately grabs your attention. The arrangement has a spartan character but, despite that, it never feels thin. The brisk drumming gives the track an urgent push from the first and the slashing guitar work wreathed in echo focuses more on rhythm, but colors the performance with discordant flashes of melody along the way. Boone’s vocal is unsettled from the first, but he fully embodies the song title by tune’s end, screaming with unrestrained energy. There’s a bit more underhanded menace or malicious playfulness implied in the tone of the second track “Nobody’s”. Boone’s singing is more restrained here than the opener, as is the tempo, but he elongates lines in such a way you quickly question the motives of his song’s narrator. Some of the vocals are bathed in post-production effects, but never so heavily they lose impact. The addition of keyboards for this song widens the album’s sound.

There’s some slow burning Sturm und Drang powering “Parlour”, a claustrophobic blues laced with tasty organ lines and a deeply emotive Boone vocal. This is far from a busy or cluttered tune, but invokes such a solid atmosphere of stress pressing down on the song’s speaker from every side and the strain Boone affects through his voice has unquestionable credibility. “Quitters & Thieves” has a low-key, woozy three a.m. ruefulness swirling throughout the tune and the ravished soul of Boone’s voice is full of torch song grit. The writing for this tune is especially stinging and Boone gives it a dramatic reading neatly dovetailing into the musical mood.

We return to Alberta’s atmospheric post modern blues with the song “Baby, Don’t Blow Your Head Off”, a sort of 21st century version of Robert Johnson’s “Stop Breaking Down” imbued with big city jazz smokiness. Everything here is intensely personal, the stakes are high, but the songwriting keeps much of the track shrouded in just the right amount of mystery. We can make of these tracks what we will. The horns are a particularly nice touch here. “Soft Lights” has a strong Tom Waits or Mark Lanegan influence vocally, but there’s a low-key rock and roll tone sparking from the song accentuated by the recurring slide guitar wail.

“Accidents” has a surprisingly funky groove during significant passages of the song, but it transforms over the course of its running time and proves to be one of the richer, more diverse tracks included on MMMMM. No matter what name Boone chooses to write and record under, he’s creating a body of work that wears its debts on its sleeve, but refashions those influences into something truly his own. This eleven song collection may rate as one of 2018’s out of left field releases for you, one you didn’t see coming in this musical climate, but there’s no question David Boone is the real deal as a musician, singer, and songwriter.