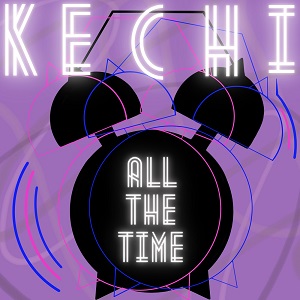 Kechi Okwuchi – “All The Time” (SINGLE)

A diamond in the rough doesn’t have to be the shiniest gem to stick out, it can sometimes do so effortlessly. In the new pop song, “All The Time” from Kechi Okwuchi it might not be the lyrics that grip the listener, but it’s the feeling. It’s a rare thing to have an artist sing with such clear joy and love, and for the listener to reciprocate just the same. The song is from the debut album, KECHI, and for fans that first saw Okwuchi on her time during America’s Got Talent, it will be no surprise that her star never loses its brightness.

It’s fitting that this outstanding singer title her debut after her first name. I believe she’s making a statement that she’s confident in the person she is and that her name and her art defines her – not her scars. Okwuchi survived a plane crash – she was one of two that lived through the 2005

Sosoliso Airlines Flight 1145 crash. TV audiences knew right away that her stunning voice would take her far – and it does in “All The Time”. In the song, she centers on the feelings of love, being head-over-heels for someone. She matches the energy, the spark with her dynamic voice.

Rolling alongside her voice is a quick, heart-beat like electro music foundation. I felt like it was a heartbeat – sometimes even skipping a beat. She continues to do her thing, singing happily like a butterfly dancing around a flower field. The colors that emerge are lavenders, bluebells, marigolds – a bold landscape. If this song doesn’t help you escape into another world, change your mindset, well, you might be listening wrong. For a singer to have such a sunburst right out of the gate is exhilarating.

There’s a line in the Journey song “Don’t Stop Believing” that goes “oh, the movie never ends, it goes on and on, and on, and on.” In “All The Time” Okwuchi brings that same sentiment with the line “rewind in my mind, going on, on, on” while singing about a movie night. It’s a bridge between the songs, that same undeniable chemistry between two people. You feel it. Okwuchi seems like the type, too, to not be selfish about it. I think she wants her fans and listeners to have the same love she’s singing about. She’s never flashy or braggadocious. She’s kind and compassionate. She carries herself with class.

When you shine a light on a diamond, a prism of colors emerges. This is just the beginning of her story- even though it might have started years ago. She’s stronger than anyone can imagine, and to live what she’s lived through means her art is going to reflect that appreciation. I think Okwuchi is forging herself a strong career by choosing “All The Time” as her lead single. I can hear this song being performed live, and even if it’s an intimate audience, my gut tells me she will win over every single person in that room. “All The Time” is a special song from a very special artist. Kechi Okwuchi is one-of-a-kind and “All The Time” is an instant hit.