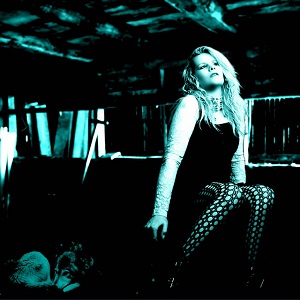 The exciting new singer/songwriter Hope Arden crafts a gem of a pop song in the single “Meant For Life”. Dazzling the listener with an unstoppable music base, a rhythm that corrals the listener to fall into line, “Meant For Life” draws inspiration from the audacity of Lady Gaga, the pop instincts of Erasure and the eclectic of Siouxsie and the Banshees. While others might have paved the way for her sound, Arden undeniably forges her own path in the exceptional “Meant For Life”.

My heart would break if you left me now, sings Arden. She hails from Vancouver, Washington and grew up in a very large family on a farm. Her wild imagination, the perfect springboard for a songwriting career, is tops. She noted that the inspiration for the song came from watching her classmates go gaga over famous celebrities. When Arden tapped into that idea of dreaming and fantasizing a life, she grips the listener, leading them into familiar territory. What some may perceive as only a fantasy, when Arden sings, it sounds real. Tangible.

The music might sound unnerving at times, like a break in the bubble. A jerk in the motion. I loved how it casts an intriguing, almost murky vibe, and at the same time, a honey-dipped sun kissed vibe. Arden puts the listener under her spell with the bewitching tones and futuristic blurbs. I thought she took generous steps that paid off with the way she mixed in her backing vocals. I do believe it’s also her singing the accompanied vocals, and the way she’s pasted them into the mix, was quite intuitive. The circular sound is dreamy pop at its pinnacle. I loved the final patina it coats on the track. It’s a black lacquer, a fierce tone. This isn’t the same Jewel style of folk-pop that we’ve heard from the Northwest Corridor. It has a flare for the edgy, but still holds onto its pop and innocence foundation. She pushes boundaries just enough to feel secure on the pop channel, but fans of the electronica and dance areas will certainly get their juices running. It’s a quick tempo, but not a sweaty pulsating tone. Arden keeps it clean.

I think in another lifetime we might see Arden break out into the alternative rock scene, but for now she’s well-suited for the pop-electronica genre. She’s a gifted storyteller and wordsmith.  I’m curious how the other side of the story would be – what she might write from the perspective of the person being obsessed over. I think there’s a very fine line between obsession and love and Arden never crosses it. She hovers over it in parts, but in each moment of “Meant For Life” she’s coming from a sincere and honorable place. I think she takes ownership of the ‘narrator’ of this story and feels empathy. What better way to express emotion in song – “Meant For Life” nails the attitude and the triumph of being in love. This is a must-listen for your summer playlist.

The music of Hope Arden has been heard all over the world in partnership with the radio plugging services offered by Musik and Film Radio Promotions Division.  Learn more https://musikandfilm.com