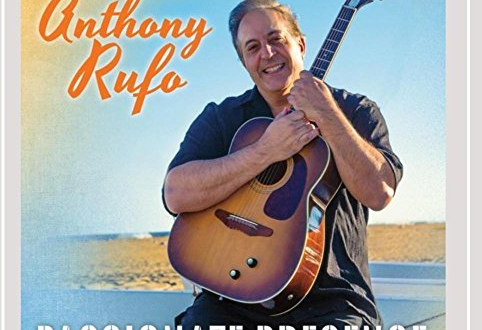 In his new album Passionate Presence, guitarist and songwriter Anthony Rufo delivers a supremely guitar-driven combination of rock, pop, blues and jazz tracks inside of a streamlined setlist fit for the spring season. Bursting at the seams with more color than a rainbow, Passionate Presence gushes with grooves in “We Can’t Connect” and the slow-churning “Empty,” blushing harmonies in “Belly of the Beast” plus the experimental “I Am 2,” and textured melodic pulsations from one end of the tracklist to the next. In all thirteen of the songs featured on this LP, there’s a sense of urgency that doesn’t always reveal itself through the tempo of the music. Rufo is out to save fanciful fretwork from itself in this emerging decade, and out of the numerous indie axe men I’ve reviewed lately, his brand of play is certainly an unforgettable one.

The depth of the EQ in “E.G.A.H.I.M.P.,” “No End In Sight,” the title cut and “We Can’t Connect” definitely ads to the physicality of the bass and guitar parts, but I don’t think it’s the sole source of machismo in any of the tracks here. It would be interesting to hear how a live translation of the material on Passionate Presence if for no other reason than to appreciate the natural grandiosity of Rufo’s stylish play without any filtration to come between artist and audience. He’s keeping things pretty clean in this LP, and especially in songs like “Eagles Fly” and “Advent,” both of which serve as fine examples of well-rounded songwriting in action.

This master mix is tight from top to bottom, but with regards to the paramount focus in the grander scheme of things here, it’s always the guitar parts. Even in affectionately complicated numbers like “Leaving It Up To You,” one of the jazziest songs on the record, the strings are the confident cornerstone of every exciting moment we come across in the course of the track. Rufo doesn’t pretend he’s Jimi Hendrix in Passionate Presence; rather than trying to relive the past, he’s forward-thinking with his conceptual approach to “Time Stands Still,” “Lady of Light” and “Eyes of Compassion,” asserting himself as a modern musical mind instead of a mere player in a sea of rhythm and rhyme recyclers.

If this is just a sample of what’s still to come from Anthony Rufo’s brand in the near future, I’m going to be very excited to hear what he comes up with in his next batch of recording sessions. Passionate Presence is a record that doesn’t demand its audience be on the same level as the musicians who brought it to life, but for those who can’t get enough of contemporary compositional wizardry, it’s just the kind of LP that was missing from airwaves this year. It’s hard to imagine not keeping Rufo on my radar through the 2020s, and once you’ve taken some time to give his trademark style of tonality a listen for yourself, I think you’re going to understand what all of the buzz has been about.

User Rating: Be the first one !
Share
Previous All Things With Symmetry (EP) by Pinewood
Next SEE YOUR SHADOW