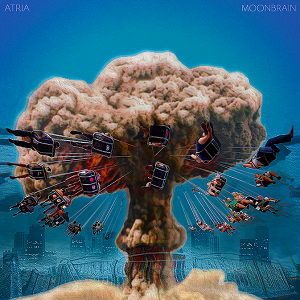 One cannot accuse songwriter and author Travis Atria of aiming small. His album Moonbrain exudes timeless qualities while still falling into place with contemporary concerns. There are several important moments in the gestation of any artistic work and this is no exception. After co-authoring a lauded biography of Curtis Mayfield entitled Travelling Soul, he turned his attention towards a second book. Better Days Will Come Again chronicles the story of trumpeter Arthur Briggs, one of the Jazz Age’s best musicians, and his four years in Nazi prison camp conducting a prisoner’s classical orchestra. He visited Paris in 2017 for research purposes and, during his stay, watched French television report on the Unite the Right rally in Charlottesville, Virginia. The connections frightened him – he’s studying Briggs at the same time individuals sympathetic to Nazi ideology.

Another tipping point came in 2018. The new IPCC climate report released that year frightened him as well. Atria, a climate activist since 2004, felt galvanized by the accumulated effects of these events. He looked at his youngest family members, the popular music world at large, and saw no contemporary or peer attempting to address the enormity of these issues. He envisioned Moonbrain as an answer to these uncertain times, a collection focused first and foremost on groove, but capable of utilizing Mayfield’s style of “painless preaching” to pierce consciousnesses. Few tracks illustrate that better than the album’s title song.

“Moonbrain” flames with passion in its opening seconds. It soon settles into a steady groove highlighted by slinky bass playing and in the pocket drumming. Atria’s vocals have a soft touch that compliments the arrangement well and he infuses his vocal phrasing with a bluesy feel. The song’s lyrics are succinct yet make substantial statements despite their brevity. The album’s third track “Jazz Cigarette” covers climate change in a way few songwriters can match. His continued focus on groove pays off even greater dividends here than the opener. His concerns are clear in the lyrics but artfully stated; the same sensuous vocal texture we hear in the opener guides his singing here as well. The brass included in the track adds an emphatic exclamation point to the arrangement.

It is incorporated into the arrangement for “Shine” rather than laid over the top. The album’s fourth song pounds its way into your imagination with immense bluster, but the boisterous production never sounds gratuitous. Sam Moss and Audrey Campbell provide robust backing vocals at key points during the song. The final track “Make Time” is distinguished by two key instrumental performances. Drummer Chris Hillman turns in an exceptionally tasteful and groove-centric performance and violinist Aaron Colverson brings enormous lyricism to bear on the performance. It is unlikely Curtis Mayfield would utilize such a wide array of instruments in his own music but that’s critical to understanding Atria’s place in the musical firmament. He has his influences, but his music carries it a step further than his predecessors. Moonbrain’s ten songs carry a heavy creative wallop and constitute one of the most impressive solo debuts in recent memory.