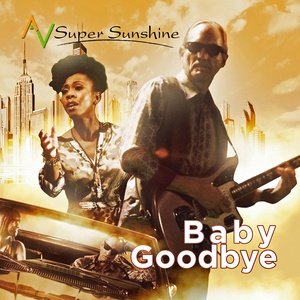 AV Super Sunshine is back with new Single/Video

AV Super Sunshine’s music has long fixated on making people smile. He’s just that type of artist that always has some positive reinforcement for his listeners. He’s back with his genre-shifting spectacle “Baby Goodbye”. Like a roadmap for what awaits the day’s itinerary, AV Super Sunshine returns to keep things adventurous and fun.

The eternal optimistic electronic keyboard amplifying 70s grooves and 60s psychedelic tones is the perfect adornment to AV Super Sunshine’s hippie but self-aware vocals. I could write a novel about how his voice is the perfect companion to his electric guitar – a bit banged up, but still professing peace and ingenuity. AV Super Sunshine, who calls the bass work in his songs “bell bottom bass” grooves, can still tip his hat to the unique bass lines found in “Baby, Goodbye” but it’s the backing vocals of Ruby Amanfu that gleans the accolades. Her name might ring a bell because just about everything she’s involved in is award-winning or critically acclaimed. Her accomplishments include her tenure with the duo Sam & Ruby (their 2009 album The Here and The Now garnered top honors in the Associated Press’ Album of Year countdown), as well as her run on NBC’s The Sing Off as a member of The Collective.

Amanfu’s beautiful voice shines, especially with her solo harmonies. AV Super Sunshine also enlists the help of drummer, Brad Pemberton, who is the current drummer for Steve Earle & The Dukes. Pemberton’s approach is infectious backbeat. I toe-tapped along the entire song and could easily isolate his contributions. It’s a rousing performance and all together the band’s synergy is intoxicating. AV Super Sunshine’s guitar swells up, motioning along the song with licks as sweet as cherry pie. The tart, lush sounds come later, and AV Super Sunshine does a great job of keeping the listener guessing where his guitar is going to lead them to next.

Lyrically, the song is pretty straightforward. Literally, AV Super Sunshine is naming places where he can take the listener and ends up at a coffee shop. Let’s go, we’ll drink a lot, he sings. I can almost imagine him shrugging his shoulders, saying to his companion, yeah, let’s go for a drink at a coffee shop. It will be fun to people watch – it’s the simple things in life that can be the most fun. AV Super Sunshine’s beaming energy and positivity never fails. Let’s go, he excitedly sings.

“Baby Goodbye” is radio friendly. Honestly, I felt like this song really has a home in the car radio. I know most people listen to Sirius XM or even Pandora in their cars, but the idea of scooting along to this track felt like a perfect fit. Listening to it on my Spotify and even my MacBook Pro speaker didn’t digest the same way. I felt like I was missing out on the soul of the song. Not to be negative – because that’s the antithesis of this band. But, on a brighter note, I think listening with headphones on a moving vehicle in any way would be just as fun.