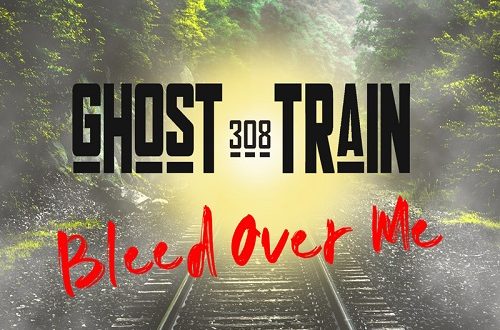 Some bands don’t mind using the same formula over and over again, and while 308 Ghost Train haven’t been in the business of making rock music for very long, they’re already proving that they’re not a part of the aforementioned group of artists in their new single “Bleed Over Me.” In the last year, this band has cut a number of interesting tracks, but in anticipation of their debut EP, “Bleed Over Me” welcomes fans of their sound into 2020 with a superbly emotional melody. They’re only seven songs in, but at the moment, they’re sounding more focused than many of their veteran contemporaries.

This dramatized beat absolutely influences the mood of the lyrics more than we’re initially expecting it to, but I wouldn’t say that it protrudes into the fluidity of the melodicism in “Bleed Over Me” at all. The two represent the yin and yang of the emotions being described in the lyrics, and though it’s a little on the nose, I don’t think it’s so familiar that audiences will be inclined to reject it as recycled. Nothing about this track falls into that category, which is a step up from what I’ve heard when browsing the FM dial in recent months.

The vocal accentuates the melody that the keys produce here rather than the other way around, but this isn’t to suggest a sense of lyrical inadequacy in “Bleed Over Me” at all. By using the verses to frame the ultra-cathartic release in the chorus – rather than centering the hook on some fanciful verse our singer could belt out in any key – we’re getting a better look at the compositional depth 308 Ghost Train have to offer than we would have in a streamlined song. This is thoughtful rock on countless levels and it’s unabashedly original (two features I love to find in the same single).

There’s definitely some potential to extend “Bleed Over Me” into a jam in a live situation, based on the structure of the verses alone, and in all fairness the loose-fitting framework of the rhythm suggests that the fireworks from such a performance could be unforgettable. 308 Ghost Train don’t sound claustrophobic in this instance, but I absolutely feel like their true home is on the stage in front of a packed concert hall. Their moxie deserves to be shared, and that can only be accomplished so much in a recording studio.

308 Ghost Train might not be a household name yet, but their swagger is quite infectious in their latest single to put it mildly. “Bleed Over Me” doesn’t push the envelope so much as it revisits some iconic components of the rock n’ roll model, and in this day and age, that makes it a bit of a diamond in the rough. There are songs that don’t have to get extraordinarily experimental to make an impact that is profound and unique for listeners, and from where I sit, I do believe that 308 Ghost Train’s most recent release is one of those songs.

User Rating: Be the first one !
Share
Previous AV Super Sunshine is back with new Single/Video
Next JESSE LYNN MADERA