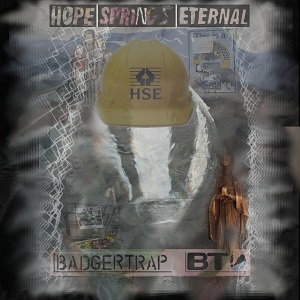 Badgertrap’s latest album release Hope Springs Eternal is the latest collection from Hal Camplin. The Bristol, UK native plays unique yet oddly familiar punk-inspired material but there’s a surprising idiosyncratic edge distinguishing his songs as well. It’s the project’s sixth album since Camplin first debuted in 2009. The rapid and continuing evolution of Badgertrap’s songwriting is notable enough but, coupled with his personal story, all the more impressive.

Camplin hasn’t allowed spinal illness and major surgeries derail his musical ambitions. He’s smashed through any objective physical limitations on his guitar playing to fashion a raw yet fluent playing style that holds your attention. Its honesty is bracing. The aforementioned punk influence on the song is far from the standard two minute thrash and scream style of the genre and, instead, owes a significant debt to thoughtful lyrics. No one can say his fatalistic humor comes from out of nowhere.

The opener “Dive In” is especially effective. Newcomers will feel reassured immediately because, whatever Camplin has done to enable him to play, it never goes astray from the recognizable. The percussive stomp peppering the tempo gives the song an elemental quality that draws you in. Camplin blends his vocals in a sort of half-woozy fashion that sounds more sneering than insensate and clear melodic strengths shine through. The simmering haywire character of the gloriously titled “Rabies in the 80’s” leads listeners into much more dangerous territory.

Off-kilter instrumentation keeps things nervy throughout. The lyrics are surreal yet grounded in concrete details; many listeners will delight in Camplin’s willingness to throw a curveball in our direction and make zero attempt to “explain” it for us. The arrangement, however, has a discernable structure from beginning to end and his vocals possess a bell-like clarity sweetening the song.

“Nothing Can Save You Now” pulls listeners back into acoustic territory. It is a deliberate and patient mid-tempo performance with equal parts angry profane denunciation, loathing, and fear among its prominent emotions. There’s no doubting Camplin’s commitment to the material and his unflinching singing here is one of the album’s unquestionable high points. His acoustic guitar sounds like it’s crackling with sparks during the song “You Did It For Me” and, by its conclusion, the accompanying percussion sounds like he’s attacking his guitar. It’s trance state music, a performing artist briefly locked into a moment of transfixed inspiration.

Slashing salvos of electric guitar add flavor to the brief yet understated “No Free Rides”. Camplin keeps its minimalist attack moving from the first without ever spinning out of control and applies vocal effects that enhance its lyrics and dramatic potential. He’s an underrated vocalist. Hope Springs Eternal’s finale “Sky Meat Day” has keyboards and piano supporting Camplin’s customary guitar, a smattering of electric guitar buried in the mix, and hallucinatory atmospherics. It’s a near-indescribable close for this release but, ultimately, ideal. There’s a likely underappreciated incantatory spirit in the heart of this album, it conjures whatever the heart of a human being is for us to hear in all its varied glories and indignities, and likewise fits its unlikely title. So long as we can open our mouths to sing, hope springs eternal.