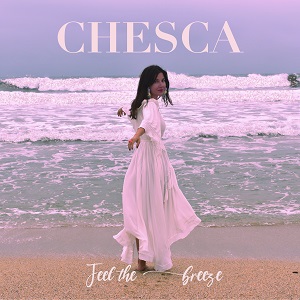 Chesca made some pretty big waves with her single “Crocodile Tears” earlier this year, and in her new album Feel the Breeze, she brings the aesthetical concept behind the aforementioned track to a feature-length unlike any other I’ve heard in 2021. Rather than skewing simple pop with an unreal knack for harmony, as she did in her debut album, Feel the Breeze features a more adventurous Chesca who doesn’t seem the least bit reticent about experimenting with something that other players in her position might just as soon be intimidated by. All in all, her enthusiasm translates to really emotional balladry and bruising pop alike in this disc.

The harmonies Chesca forms with her lead vocal in “Woman Down,” “Happy,” “Could You Wake Up Now?,” and Feel the Breeze’s title track break up an otherwise surreal backdrop with sharp lyrics and brooding melodicism of the most intimate variety. There’s certainly nothing wrong with the postmodern pop movement – after all, I don’t think you can listen to an album like this one without hearing its influence all over the tracklist -but she’s not content to recycle pseudo-psychedelic elements in place of exploring something in-depth and cerebral on a much more poetic level here.

Lyrical context comes to us defined by rhythm in “Orange County Juice,” “Crocodile Tears,” “No Words” and “Could You Remind Me?,” proving both to the audience and herself that there’s really nothing within Chesca’s reach that can’t be turned into an agent of evocation. She’s meticulous in how she expresses herself in this album, but she isn’t steering clear of the idealized conceptualism that ambitious players too frequently avoid, mostly in fears of losing marketability on the mainstream end. This singer/songwriter doesn’t care about this as much as she does making smart, original indie music, and that’s more than evident in Feel the Breeze.

There’s an old school charisma that shapes almost every emotion behind Chesca’s singing in this LP, and especially in “You Ain’t the 1 4 Me,” “No Words” and “Woman Down.” You can tell that this is an artist who gets as much inspiration from the iconic torch singers of a century ago as she does the cosmopolitan swing of early hip-hop and even the Bakersfield sound. Rather than this spelling out a fractured sound in her music, it’s yielding a diverse profile in Feel the Breeze that makes her style all the more endearing to audiophiles in particular.

Feel the Breeze is a bold and unabashedly strong-willed follow-up to Chesca’s first album, and while I don’t think it’s a complete departure from the aesthetics she put forth in her rookie affair, it definitely highlights some of the components of her artistry that might have been obscured by her previous devotion to simplicity. This is a heartfelt record that feels like a passion project but spares us the innate theatrics a lot of solo sophomore LPs wind up sporting. I’m feeling the vibe here this summer, and I doubt I’m the only critic following Chesca to say so.