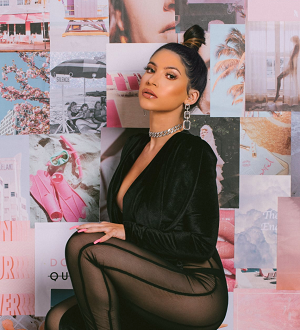 For the first couple of bars in Gigi Vega’s “Down Crazy,” west coast trap and retro g-funk conceptualism seems to hang in the air like a stubborn fog over the cosmopolitan city lights of early morning, but the fierce beat from the percussion is soon to break through the clouds. Behind its strut, Vega is ready to start a harmony that wraps us in its melodic ribbonry and asks for us to step a little closer to the warmth of the music as it evolves before our very ears.

The instruments in “Down Crazy” structures a deceptively indulgent harmony in the first half of the song that is inevitably revealed to be one of minimalistic origins in the second, but this doesn’t bring the effectiveness of the climax here crashing down.  Contrarily, I think that juxtaposition – and specifically how Gigi Vega is using it in this instance – is what gives us a better sense of how many working parts there are in this composition, as opposed to spotlighting the performance skills of this player exclusively. After all, anyone can step into a studio and dress something up in a contemporarily sexy fashion; to create something that is both expressive and relatable to the listener requires a little more attention, and beyond that, a relationship with the medium in the first place.

Vega’s vocal is such a grand agent of seduction in this piece, but it’s not overstated to wave us closer with its melodic presence. She’s not trying to imitate a more melodic version of Bia or Hi Love in “Down Crazy;” she wants the instrumental groove to be the groove, and her voice to be illustrative of her complex emotionality rather than her depth as a singer in the auto-tune age. Some might consider her perspective to be one of a puritan nature in this regard, but I don’t think you can make a single like this one without having a multidimensional attitude when it comes to creating every part of a pop song.

“Down Crazy” is not your mom and dad’s slow jam, and Gigi Vega is not your average pop singer. 2021 has been even more unpredictable for the pop genre than 2020 was, but if you’re trying to find reliability, Vega’s the gold standard in the industry right now. “Down Crazy” takes fleeting balladic concepts and smacks them with hip-hop attitude, lusty pop harmonies and a freewheeling persona from its performer that is as contagious as can be. In short, this is an immersive crossover that doesn’t go out of its way to impress with aesthetical theatrics – it comes to us sporting bright lights naturally, which is something I have not found in many tracks commercially produced or independently recorded the same lately. Time will tell for sure, but it would certainly seem that Vega is a charming artist well on her way to the top.