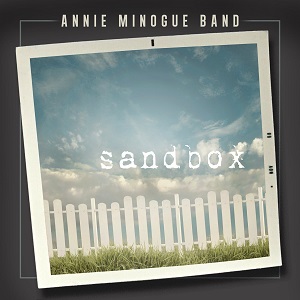 Rousting us awake from a musical mundanity-induced slumber, the Annie Minogue Band’s “Sandbox” slowly but surely starts to fill the air around us with a countrified blues-rock sound that has no equal on the mainstream level this summer. Certainly, it’s been said by quite a few critics before me that country crossovers are where it’s at in 2021, but I wouldn’t define this single as a Nashville product outright.

There’s too much of an Americana twist to the lyrics, and furthermore, too much of a roots-rock identity assigned to the structure and delivery of the melodies in this track to give it over to the country establishment. Nashville hasn’t produced anything as true to the old guard in American music as this in a generation or so – at least outside of the underground beat – but my gut tells me that the majority of Annie Minogue fans didn’t get into her band’s work because of their place on some scene’s totem pole. With a vocal as velvety as hers is, this is a singer who needs little beyond a stage, a microphone, and some qualified bar-style instrumentalists to turn more than a few heads.

As a climactic moment for “Sandbox,” the chorus here is where we really get a feel for how much energy Minogue and her cohorts are putting into the performance, starting with the rhythm of the music. There isn’t an instrument nor a word out of place in the arrangement of this single, and one could even say that the tightness of the material says more about the connectivity of these players than it ever would their rehearsal habits.

Anyone can practice a slick beat or a sensuous harmony into existence, but pulling something together as seamlessly as was done in this release is a step above what the status quo calls for. Instrumentally speaking, there isn’t anything about “Sandbox” that would lead us to believe that the Annie Minogue Band doesn’t live in the studio, though the time spent there likely produces more new ideas than it does opportunities to revisit old ones. The aesthetics are retro, but the concepts and the production quality are planted in 2021 and the high definition standards listeners of this era are used to.

I wasn’t listening to Annie Minogue and her band as closely as I probably should have been ahead of “Sandbox” hitting record store shelves this July, but that’s going to change as the track finds its way into my summer playlist to stay. Minogue’s moxie is telling of the ambitions she still has as a player more than fifteen years into her professional career, and if there’s anything that I want her to focus on specifically for her next release, it’s making her voice as central in the spotlight as she can.

She’s become a phenomenal singer where she was already good enough to raise an eyebrow among even the harshest of critics, and in this single, we’re reminded of what brought her name into the headlines to begin with.

The music of Anne Minogue Band has been heard all over the world in partnership with the radio plugging services offered by Musik and Film Radio Promotions Division.  Learn more https://musikandfilm.com