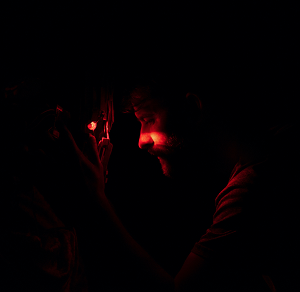 “Break! (My Heart)” is a riveting track from Viiola Bloom. This crooner is giving The Weeknd a run for his money in this synth heavy gem. Quick to elicit some killer synth, “Break! (My Heart)” showcases baritone vocals, gripping the listener in a way that elicits a night out at the club. The streaming sounds, much like searchlights following that special someone, Viiola Bloom creates a memorable listening experience like no other.

And everything you said to me implode, Viiola Bloom sings. His real name is Andrew Muller and he’s based in Vancouver, Canada. What really struck me the most listening to his song is the way that it combines the throwback synth of a band like Talk Talk or the deep-voiced vocals of Depeche Mode’s Dave Gahan and catapults the sound to the now. Throwing out light like neon, the dance tones in this track are huge. This is the song that you want to crawl inside of and never leave – Viiola Bloom creates a wonderous, pop electronica world. The waves are linear, seemingly boundless and ageless. Within moments of the song’s beginnings there’s this underlying thrill, a pulsating anticipation. As Muller sings, the sonic blends shift and vibrate in a way that is shape shifting around his stellar vocals. He’s too cool to be singing a song that would have a vanilla-sounding music bed. Instead he has the makings of a being the next Falco.

Just over halfway through the song, a crash, a scrambling. The song almost zig-zags to a halt. Then it sort of nonchalantly starts again. It’s quirky and made me think of passion. When you’re in love there are moments when you really do feel like your heart will stop – that it will all end if you’re not with that person. I think that’s the feeling Viiola Bloom is trying to convey with this abruptness. He sort of re-arranges the table setting for a split second before jumping back. A restart. I thought it was the end of the song at first, or he was trying to mix-in the sound of tuning or changing a radio station. I kinda liked it after a few listens.

I think it’s a very interesting way of creating a different level of emotion. I think it’s a weird way of floating the emotions across the song’s bridge. After the pause, if you will, it would be easy to just ride out in the sunset, but the song’s ending creates an even deeper fever. Viiola Bloom builds upon it and where others would just stop, they take the backroad but never short cuts in getting to sonic perfection.