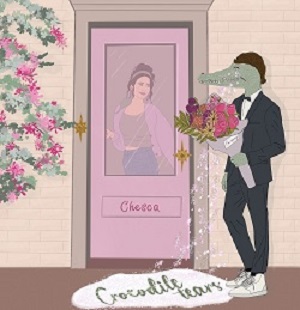 With 2020 still freshly in the rearview for many, breakups were on the rise and many of our true natures were exposed to our closest to us. It certainly wasn’t pretty and I have heard my fair share of near horror stories of couples disbanding over angry disputes. But, I think we’ve all been in that situation where you’re sitting with a friend out of a breakup and then they go “It’s fine because here is what’s going to happen”.

We’re absolutely fascinated today in crafting narratives. It’s not just for creatives now, it’s actually baked into our every day with the advent of social media and it’s become somewhat performative. It’s easy to get sick of it when authenticity feels like it’s at an all-time low. This preamble is to set the stage for truly one of the best songs I’ve heard this year from an indie release. Chesca and her single “Crocodile Tears”. Chesca first hit the scene in 2018 with her pair of singles, “Tu Y Yo” and “Nunca Jamais”. This single is leading up to her major summer release “Feel the Breeze”. If this single is any indicator, this might be among the best work Chesca has produced.

A former teacher who’s mastered transcribing her emotions into her music, the narrative follows Chesca walking us and an unnamed person of either romantic or platonic connotations and what the situation is bound to be. It’s kind of a confrontational song putting us at first in the position of this unnamed person getting a dressing down that we’re hopefully only lucky to experience a handful of times in our life. Chesca’s vocals are so controlled in this opening following a ferocious roar that feels like it came deeply from her soul. The sounds are crisp and clean, definitely taking inspiration from music’s current favorite flavor of synth and other electronic orchestration. There isn’t a lot of wild progression or layering in the track as it continues, but that doesn’t mean it’s devoid of details. The chorus is wildly memorable and while it certainly becomes louder and more confident as it goes on, it’s never overwhelmed by the production. There’s honestly something almost akin to like a broadway or theatrical performance to it. Chesca just feels larger than life and she’s always had this astonishing presence that I’m sure transcribes amazingly on stage.

This is an exciting direction she’s currently taking and I hope she really maximalizes its potential as it fits her effortlessly. She takes this and it would be easy for her to fall into the cacophony of Chvrches knockoffs or old La Roux, but Chesca takes what I’m sure are hyper-specific inspirations and makes it her own. If you’re looking for something new and refreshing, I can’t recommend this album enough. I was reminded of one of the last times I was lucky to experience music in a room with people and that electrifying energy, and somehow that spark is alive and well in this song.