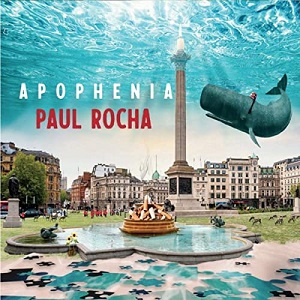 Paul Rocha’s résumé is legendary in the New England underground, but you don’t have to be familiar with the decades’ worth of session work he’s done nor the two solo albums he’s put out thus far to appreciate the wealth of experience he puts into his new album Apophenia. There’s nothing clinical in this record’s tracklist – to be frank, I don’t think you could make a song like “The Other Side” without having a philosophical identity to begin with, let alone lacking the warmth of a troubadour’s wail.

In Apophenia, Rocha wanders through trying lyrical scenes that put his poetic protagonist against a lot of self-doubt and uncertainty, but the anxieties he’s made to encounter only make the audience feel more confident in his ability to overtake any obstacle in his path. He’s rejecting the temptation to revisit his musical past in “Sister Silhouette,” “Echoes of Never” and the hard-hitting “They’re All Dead,” instead making a commitment to exploring the roots of his aesthetical influences in general. There’s a hint of Rubber Soul here and a touch of Tim there, but at the center of everything this record has to offer isn’t just the patchwork of a contemporary artist, but the very heart of that artist himself.

It’s quite obvious from the get-go that eliminating the barriers often created by production embellishments was something on Paul Rocha’s mind throughout the making Apophenia, but he wasn’t necessarily stingy with the varnish he did apply to tracks like “The Day That I Fall Down” or simpler “Klondike.” The grooves that follow us like a shadow even in slow songs “Like Lavender Rain” and “Sister Silhouette” are impactful, inspiring an emotional subtext that makes the lyrics in each track that much more ironic. This is certainly a good LP to put on shuffle and unwind with largely because of the flow its material enjoys no matter the volume or order in which they’re played. Progressive indulgences are pretty much everywhere you look and listen in pop music right now, and so it’s definitely refreshing to hear an album that doesn’t feel like a concept record outright but still holds a sexy shape.

Apophenia is a culmination of the best attributes Paul Rocha has as a singer, songwriter and lifelong musician, and though its structure is one I have to deem rather cut and dry, the music this LP has to share with you has a flurry of colors you won’t be expecting to find. It’s been a tough year and a half for musicians around the world, but the searing performances and sentimental poetry that are infused together in Apophenia make it seem as though alternative rock is going to bounce back even better than before on the underground level. Rocha’s voice is one I don’t see going away anytime soon, and as long as he continues to make enigmatic and rambunctious content like this, he’s going to remain not just a relevant source for quality music, but a hero to an alternative rock movement in need of better direction.