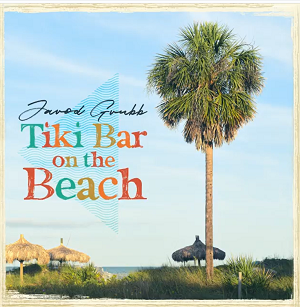 In a short, simple country song like “Tiki Bar on the Beach,” it really doesn’t take more than just a couple of seconds into the track for listeners to immediately get a feel for what the music is all about – and in this case, the material is everything its title would have us believe it to be. Singer/songwriter Jarod Grubb is starting summer today, and he’s kicking back, leaving his cares and concerns about everything in the world on the mainland and jetting away to an island paradise in “Tiki Bar on the Beach” any of us could use some time in right now. He’s got an anti-pretentiousness about his composing that I immediately liked when checking out this song, but even more important, he has a voice that was made for the country genre.

When this young man is belting out the chorus, he could be doing it in front of a full orchestral backdrop and still sound as charismatic and intense as he does in this much humbler setting we find in “Tiki Bar on the Beach.” His voice has a lot of power behind it, and I can imagine it being even more potent if given the right compositional circumstances to come undone. He’s being rather conservative and playing it safe in this performance, likely just to give us a depth analysis not possible in something a bit more raucous and loud, which is all he really needs to be doing at this point in his professional campaign.

You can’t beat a rhythm as openly inviting as this is, and it reinforces my own belief that country does best when all of the complexities are left out of it entirely. Grubb doesn’t need a thing in the world other than a guitar, a microphone, and an audience to croon to, and if he did, he wouldn’t be sounding quite as boss as he does in “Tiki Bar on the Beach,” stripped of literally all of the synthesized noise his peers would rely upon when making anything original this year. This man doesn’t need the machinery to make beautiful music, and though I don’t believe folks were debating that ahead of this single’s arrival, they certainly won’t be once it finds a permanent home somewhere on the FM dial.

Puritans, occasional fans and everyone in between in the realm of country music right now need to stop focusing on mainstream players alone and give the likes of Jarod Grubb a shot, as I think we’re going to be seeing and hearing a lot more of his music in the years ahead. He’s off to a good start with this performance, and while he’s going to need a lot more time in the studio and on the stage before he can really start claiming his own audience on the Nashville circuit, what he’s already doing is enough to convince me he’s a gem worthy of your time. “Tiki Bar on the Beach” is a special single and offers a lot of reasons to like where Jarod Grubb might be going next.

The music of Jarod Grubb has been heard all over the world in partnership with the radio plugging services offered by Musik and Film Radio Promotions Division.  Learn more https://musikandfilm.com