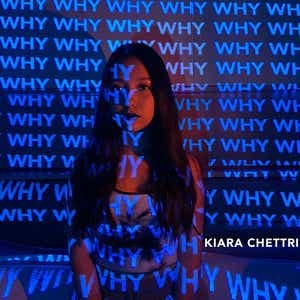 There’s a new normal taking the music industry by storm, partially thanks to the last year being such an abnormal one; young artists are using their insider knowledge in regards to social media being so finicky and intricate in its usage, and the knowledge they have is giving them more than a small nudge towards pop stardom. Some of the recent examples include overnight successes such as Lil Nas X (who used TikTok’s algorithm to boost his song “Old Town Road” into the stratosphere), Billie Eilish (who came from recording in her bedroom with her brother to being one of the top-selling acts in the world), and Olivia Rodrigo (who similarly saw massive numbers in response to a TikTok trend.)

If you’re able to harness the energy of social media to your advantage, it can be akin to holding the power of the sun in your hands — it’s amazing how much easier said than done the act is, though, and aging out of such potential is a real hazard within the music industry. For Kiara Chettri, this isn’t something she has to worry about for a while, as she’s merely seventeen; her latest song “Why,” which follows up her release from last year 4AM, hasn’t gone viral yet, but her staying power is evident and there’s only a matter of time before the global masses start to take notice.

For some, being featured in Rolling Stone is as good as it gets. Well, that’s where Kiara Chettri is starting, and she’s only just getting started. Featuring a cover spot on Rolling Stone India last December, Chettri is a New Delhi artist truly giving it her all in her new single “Why.” Functioning as a ballad with a vulnerably honest and gaping heart on its sleeve, Chettri’s incredible vocals begin over a soft piano as the song slowly ramps up through the use of percussion and strings. The familiarity to songs off of her debut release 4AM aren’t very noticeable, as this almost entirely acoustic approach isn’t anything approached in mass there; instead, Chettri uses “Why” as an excuse to further stretch her limits and broaden her range with something entirely driven by raw emotion with the aid of a compositional style that adds another set of tools to her ever-expanding repertoire.

The return from a debut album with something so drastically different in tone, especially going from an album as upbeat as 4AM to a single as openly personal as “Why” is a brave choice made all the more impressive by Kiara Chettri’s young age. Her artistic decisions feel well-planned and are executed brilliantly, and the ambition contained within this single alone spell great things for what’s still to come for her budding career. Between the various production styles and genres tackled within her debut album and the contrast of “Why” coming less than a year after, and coming as something so uniquely independent, there’s seemingly no end to the potential that will eventually be covered by Chettri. The songs have just begun, in the grand scheme of things, and the matter-of-fact maturity already boldly on display from Chettri spells incredible possibilities for her musical future.

The music of KIARA has been heard all over the world in partnership with the radio plugging services offered by Musik and Film Radio Promotions Division.  Learn more https://musikandfilm.com