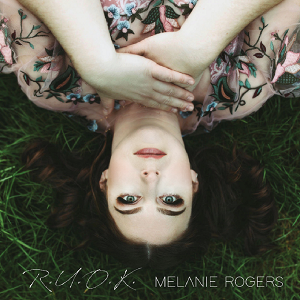 I am a firm fan of Melanie Rogers’ latest single “R.U.O.K”. Her previous single release “Fever” played like a fresh breath of musical air during the pandemic and announced the arrival of a major new songwriting talent. I predict Rogers will not toil for long in semi-obscurity and will, with each successive release, build a loyal following eager to spread the word about her considerable gifts. This isn’t some eye-catching semi-skilled vocalist with a team of songwriters powering her bidding career. Rogers has immersed herself in music since single digits and boasts the unique experience of many years playing Contemporary Christian music. This experience peaked during her college years when she played with the chapel band for scores of eager listeners.

Anyone writing about the perils of living as an empath stands apart. This choice alone positions Rogers as a songwriter interested in bearing her life for listeners, never in an uncomfortable way, but in a manner rife with sensitivity and warmth. There’s nothing downbeat about the surrounding music. It does have a pensive quality, in some ways, you can hear that in its lyrical piano playing, but soon transforms into a striding pop gem. The momentum it builds working in concert with the bass, drums, and some light production effects may be surprising but the single packs quite a wallop.

Her time performing Christian music prepared her well. It wasn’t long ago when Rogers believed she wasn’t properly serving her Savior if she wrote or performed songs that didn’t praise God but now sounds like a soul unleashed. A fallout with her church upturned those beliefs and you can’t help but marvel a little at how comfortable she sounds. This moment has been a long time coming for Melanie Rogers and she sounds ready to meet it.

Bass player Adam Schaefer and drummer/percussionist Remy Morrit are fantastic musical partners. Morrit will capture the attention of many balancing a powerful primary pattern against some secondary percussion that accents the song. The style and tastefulness of this has a magical effect on the recording. Over increasingly strident drums and piano playing is another rhythm percolating in shadowy counterpoint.

The song runs three minutes. The same economy of style with an emphasis on substance defining other aspects of the track defines its construction as well. Listeners will always value a song that never overstays its welcome. This is another part of Rogers’ talent that’s so unexpected – her surehanded compositional control. She knows what direction she wants this song to take from the beginning and follows it through to the conclusion she wants.

Great things keep happening for Melanie Rogers. She scales musical and emotional heights in this song that feel like catharsis for the vocalist and provide that same purging for listeners. “R.U.O.K.” is a song she needed to write, needed to perform, and it will undoubtedly propel her to another level of commercial and critical acceptance she richly deserves. Her latest single is an unmitigated triumph and I am sure we’ll be hearing from her again soon.

User Rating: Be the first one !
Share
Previous Joe Piket “Everything Is Different” (LP)
Next Kiara Chettri “Why” (SINGLE)