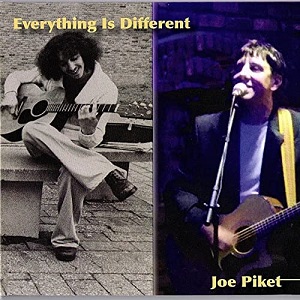 Joe Piket “Everything Is Different” (LP)

Long Island singer/songwriter Joe Piket has earned a variety of well-meaning labels over the years but defies them all. His idiosyncratic songwriting shares a common frame of reference with older performers such as Billy Joel, among others, but his album Everything is Different feels more like a wholly personal release than his earlier fine work with his band The Storm. The eight track collection, including two covers, spans a wide stylistic range without ever sounding like a hodgepodge of ideas cobbled together. Piket is a popular live performer in the New York City area and its environs so it is unsurprising that the songs are geared towards live performance; as fine as this release is, there’s little question these songs pack even more power when performed for a live audience.

Some songs, without question, might be more problematic live than others. Everything is Different opens with “Now I Have Everything”, a daring mix of quasi-classical and doo wop in a single package. The precise vocal harmonies present throughout the track are difficult to replicate live, but they have an engaging sound here. Transitioning from the piano and strings powered introduction into the doo wop portion of the track comes off without a hitch. His songwriting creativity deserves plaudits here.

“Coke Stevenson” shifts gears into a country-flavored AOR rock track referencing a legendary Texas governor. Piket’s talent for layering his lyrics with significant detail as well as well-rounded characterizations distinguishes his best songs and this cut ranks among the album’s finest moments. The airy mid-tempo approach he adopts is effective. “My Rear View Mirror” is another highlight of the album. Piket tackles the reggae style without missing a step and the gentle alternating between the song’s chorus, flush with supporting vocals, and its verses makes for a memorable blend.

The upward spiral of “Piles” is unlike anything else on Everything is Different. Incorporating keyboards in a prominent role sets this apart from the preceding songs with its progressive rock flavor. It may be quite a surprise for some after the comparatively straightforward approach heard in the earlier songs but they share the same risk-taking spirit, The album’s finest cover comes with “She’s Funny that Way”, popularized by Billie Holliday. Piket, naturally, cannot match the vocal excellence of Holliday, but nonetheless acquits himself well. He captures some of the smoky atmosphere of her version and it is a testament to the song’s malleability that in 2021, long after its presumed heyday, talented performers such as this can still bring it to life.

“Another Age” closes the release with a note of grandeur. This relentlessly imaginative musical concoction possesses a restless creative spirit freely moving between genres with impressive confidence. Though he doesn’t have a great “technical” singing voice, Piket nonetheless inhabits this sprawling epic with authority that never overplays his primacy in the song. He meshes well with the instrumental makeup and matches the song’s cinematic ambitions. Everything Is Different has something for everyone; rockers and ensemble pieces primed for live success as well as big canvas musical numbers brimming with energy and intelligence. It’s one of the year’s finest releases.