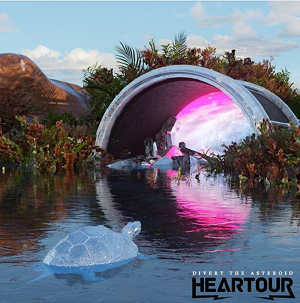 Led by its ethereal melody, entirely synthetic in substance and yet capable of drawing us closer in the same way an acoustic instrument would, “What This Means” has all the guts and glory of a lead single like “Little Waves” or “When the Lights Go Down,” but as a deep cut in the new EP Divert the Asteroid, it proves how much depth Heartour has as an alternative rock act in 2021. If you haven’t heard the music this one-man band has been producing over the past twenty years (save for an eight-year hiatus), you needn’t feel intimidated by this latest installment in the discography Jason Young has assembled under the Heartour branding; quite frankly, I think this might be as close to a signature release as a non-LP can be.

The relationship between immersive tonal chaos and the lyrics it would be tasked with framing becomes pivotal to our understanding – and inevitably relating to – the narratives in “When the Lights Go Down” and “Twice a Day,” but I don’t think either is artsy enough to serve as conceptual exhibitions here alone. There’s plenty of live potential in each of the five songs in this tracklist, and while they’ll probably take a bit of manipulation to readapt for a stage show, I think it’s something Young needs to go out of his way to consider over the summer season. Heartour’s sound is brutish and intense while still being melodically palatable, which tends to be a winner with most adrenaline-starved live audiences in my experience.

“What This Means” and “Oh Love” could have been fodder for music videos just as well as “Little Waves” and “When The Lights Go Down” are, but I can certainly understand why Young chose the tracks for promoting this release that he did. There’s certainly a radio-readiness to both singles that cannot be denied, and better yet, I don’t even think they were designed with this intention in mind. Everything on Divert the Asteroid sounds notably natural and human in the best manner that modern indie rock material can, which isn’t something I can say for the majority of music I’ve heard stylized specifically with the goal of getting lucrative airtime from the corporatized, FM element in the industry, no matter the genre.

Raw, uncompromising and real, Heartour’s latest release is the sophisticated outsider EP none of us knew we needed, but many of us will regard as one of the best records to hit store shelves and streaming sites in all of 2021. Divert the Asteroid has moments of shapeless brilliance and disciplined angst in equal measure, and whether it creates a wave of newfound respect for Jason Young or not, I think it’s going to be remembered as one of the most significant power punches of this era in his career when his time in the limelight has come to an end. It’s short but sweet, a juggernaut that isn’t overly gigantic – Divert the Asteroid is a little bit of everything I like about Heartour, which is what a rock-solid EP needs to be.

Share
Previous Bill Abernathy “Who Are You, Who Am I?” (EP)
Next Joe Piket “Everything Is Different” (LP)