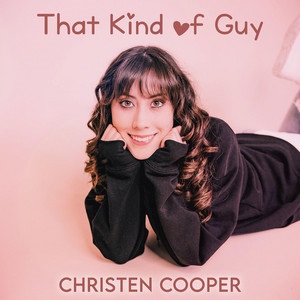 Young love can be a powerful thing – and it can also be one that is the complete opposite of a Hollywood ending. Christen Cooper maps out the guy she’s searching for in the new single, “That Kind Of Guy”. Cooper crafts an infectious chorus and transports listeners back to a simpler time and tops things off with a robust music bed. “That Kind Of Guy” recalls the feelings of wanting a summer love, yearning for something that just feels right. Cooper accomplishes this and more – “That Kind Of Guy” is undeniably fun.

Cooper, sounding cute, is pretty firm on just who this guy should be. A guy who can dress up and keep it classy, or chill on Taco Tuesday, she sings. She sings like she was made for primetime radio. She has the perfect pitch and just the right amount of pixie dust and twang to sway the listener between pop and country pop. While the song starts with a twangy, guitar strumming – as if there were skipping or jogging happening – Cooper comes into the soundscape warmly. I liked the contrast between her voice and the music’s current. There’s a symbiotic relationship happening with the two, yet her vocals really take the lead and offer up a magnetic pull.

The kind of guy who lets you wear his hoodie, calls cause he’s missing you, not just when he’s lonely, Cooper sings in the first half of the chorus. She paints a vivid picture, and the idea of a guy lending his hoodie could not be more on-the-spot. You have to smile at that, and Cooper and the music make it super easy to draw much joy. I think country fans, especially, will want to hear this one live at a festival or open air amphitheater. It calls for it! I wonder, too, what this would sound like in an intimate setting. She might consider an acoustic coffeehouse-vibe version. I think either way, it would blow audiences away.

I really liked the music base. The rhythm section, especially, checks a lot of boxes. It’s glazed with a surging guitar and generous flow. I found this one to be car stereo ready, too. You know the kind of song you want to listen to in the summer with all the windows down, and it’s blaring so you can sing along just as loud. It’s cool enough, too, where if you get caught singing loudly at a red light, you won’t be embarrassed. Now if you are embarrassed about something else while stopped at a red light, then “That Kind Of Guy” isn’t to blame. Nor is Cooper.

Cooper does an outstanding job at uncomplicating things. Too many indie artists fall into the trap of trying to be more than who they are or write for what they think will be a hit. It’s hard to say why one song grips one listener and not the other – but I can tell you that audiences can see through artists that are trying too hard. I think Cooper is delightful.