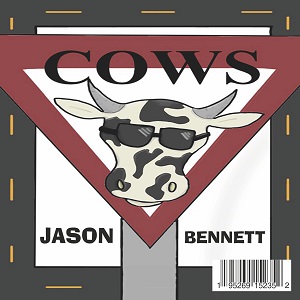 Cows, the sophomore CD release by Jason Bennett, is a very fitting title for a variety of songs that come together from different places to find a home in the Americana, folk, country and even rock influenced territory. The unplugged approach keeps it grounded for the most part, but that’s the idea with all folk and some country music. The album even has a cover of Steelheart’s hit from the 90s, which only a good musician would attempt, especially in the way Bennett pulls it off in the most unsuspecting way. The result is great, as I will get into as the songs go in their order.

Bennett can sing and play without question, and the songs on Cow, all have something compelling about them. The album kicks off with “3rd Of My Life” and it’s a fun-loving tune with harmonica, about the finer points of life and how we don’t live them all. This is a great way to open the album and get the interest going through some instant humor and charm. “Mystic Love” is another story, with much of it told on the exquisite piano as well as the vocals, which have a bit of a bluegrass flavor, but it rocks quite a bit as well, and stays humorous throughout.

“I’ll Never Let You Go” is a cover of the Steelheart song that broke the band in the early 90s, but the Jason Bennett version is not what you’d expect unless you already know him. He plays it like a straight ballad instead of a rock power ballad, and he doesn’t disgrace it in the process. The fact that Bennett attempted the song in this way takes a lot of guts and he makes it his own in the process. Not bad at all, in fact, I enjoyed it.

The album continues with some great storytelling on “Wino Rich” with the narrative centering around the past and what the future holds, in the framework of a serenade. “Seen A Lot Of Cows” pertains to the album title, and probably the biggest storytelling point of the track list. It bubbles along nicely and keeps your ears yearning for the next track. “Day Of Joy” is where things slow down and Bennett shows his instrumental skills, which are quite dazzling in this display of mostly intricate acoustic guitar playing. Another slice of excellence for sure, with no clunkers in sight.

“Escape” follows a familiar classic melody of which I can’t place, but it’s just as well, because it stands on its own two feet. “Life” is lyrically one of the more serious tracks, without being too depressing. But it’s rectified on “Rainbow” with some more uplifting moments and excellent guitar tone. “Mid Life Crisis” is sort of a country song with easy listening qualities and some more tasty guitar lines. And “Libertarian Blues” is about as much as you can guess, especially if you can appreciate it. Either way, if you agree both sides are wrong, you’ll like this song. You’ll also like how the album closes with “Escape” (Reprise) taking it out with a touch of elegance.