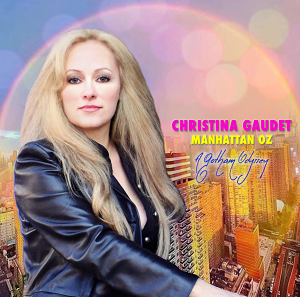 Manhattan Oz: A Gotham Odyssey is prolific American blues rocker Christina Gaudet’s 10th solo album. Packed with jam-worthy guitar grooves and hard hitting drum beats, Gaudet’s flavorful vocals is still the highlight of this dark horse hit parade. Just as the humidity-like rhythms call out like a sweaty dance craze, it’s Gaudet’s triumphant and Cajun-phrasing that rises to the top. She’s clear as day, full of life and telling her story to the world.  Manhattan Oz: A Gotham Odyssey is 10 tracks that tell her story, her life. Maybe though, it’s more about an American story than she realizes.

“New York City” jumps right into action. Blazing guitars and Gaudet’s crooning rocker vocals give the listener a quick sense of her viewpoint. She’s coming from a place that is not her home and she’s not intimidated by the city, but she’s in awe. She doesn’t let on that the city is going to be her home, but it’s her next stop in her path. In “Breathe Fierce Love” she brings the listener back to the idea of the city (when you can’t catch a break in the city, she sings). When she sings those lines, something about it reminds me of Alanis Morrissette’s “You Oughta Know”. The song has a feeling of being claustrophobic. Like the whole town is breathing down on her, and she has pressures to succeed and ‘make it’. The guitar work cuts through the song like a knife – tearing at the song like things are going her way and then rip – they aren’t. The percussion feels just as relentless, as if her dreams are her focus every day.

“Transend Time” and “Living It Till I Die” continue the rock spree. “Tested By Dragons” is a peculiar, but clever play on the game of love. Gaudet is steadfast and captivating over the bruising soundtrack. At the source of the sound, the underbelly of the guitar, bass and drums is a jamming mix of piano and spicy tones. The guitar always reaches and branches out in these tracks – but never goes too far as to overreach. “Immigrants” and “Bayou” further cement the listener’s understanding of who Gaudet is, not only as an artist and musician, but as a woman and storyteller to her family’s story. “Bayou” is cold and dark, but at the heart of the song is a strong feeling of light and love.

“Hold Out For Love”, “Lessons Of The Water” and “New Renaissance” each contribute yet another solid outing, fresh with Gaudet’s riveting vocals. She keeps the momentum and carries it through the album’s finish. It’s hard to choose a favorite track – they are all excellent. I think listeners will find “Living It Till I Die” and “Black Bayou” as songs indicative of Gaudet and perhaps most representational of her craft. I’m quite impressed and have to say that this collection came out of nowhere for me and I’m a converted fan. Keep Christina Gaudet on your radar folks, this self-described Cajun Queen is the current crown bearer of blues rock.