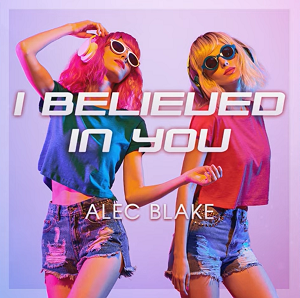 Alec Blake “I Believed in You” (SINGLE)

26 year old German producer and performer Alec Blake shares the same sort of origin story as many musicians. Born into a musical family, Blake began playing piano at seven years old, guitar when he was thirteen, and moved onto drums by age sixteen. He played drums in a local band blossoming out of his school experience that helped shape him for later opportunities.

The COVID-19 pandemic did not sampan Blake’s creativity. Many people adapted by intensifying their creative focus rather than succumbing to despair and hopelessness during that period. Blake, already steeped in songwriting, turned his attention toward learning the many nuances of music production.

It is served him well. He’s obviously a quick study as the single “I Believed in You” has a satisfying across-the-board sound. It’s electronic dance music, techno while still remaining accessible, and Blake has obviously how to organize the composition in a dynamic and hard-hitting fashion. This understanding of dynamics echoes the influence of a pop, even rock, aesthetic every bit as strong as the song’s electronic pedigree.

The vocabulary is simple, the words direct. Blake’s “I Believed In You” communicates a common situation, it’s a song about love thwarted and betrayed, but picks its clichés well. A sense of identity emerges from every aspect of the track. You hear it in the synthesizer orchestration, the electronic drumming, the insistent vocals, and the aforementioned message. It isn’t a select audience that Blake is aiming for with this cut; it is anyone who enjoys to dance.

It connects with the body far more than the mind. The fact that it connects with the latter at all sets Blake’s music apart from your typical techno fare while the physical connection it fosters with listeners will bring them back for more. “I Believed in You” makes it obvious that Alec Blake is in it for the long haul as a composer, he is not another flash of the pan in a long line of such music.

The vocals are perfect for the track. They don’t spend a great deal of time focusing on nuanced phrasing, but nevertheless, manage to incorporate plenty of emotion in a performance not particularly renowned for such qualities. Blake doesn’t prioritize pure relentless sound above all else but, instead, gives listeners a broad-based approach. If it harbingers his future, then there is every reason to believe he’s found a winning formula.

There is no reason to believe that he won’t continue elaborating on what we hear with “I Believed in You”. It’s a track conclusively proving that there’s nothing he can’t do and this single offers up the first convincing test of powers that will only grow with each new release. This is an excellent beginning and the more to come will be worth following all the way through. It’s the beginning of something great and Blake won’t soon be slowing down from the creative stride he’s discovered with this single. We’ll be following along from here and it’ll be an entertaining ride.