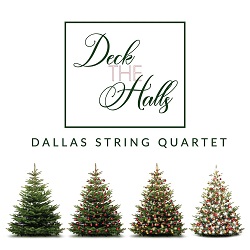 The holidays are here and the brighter the cheer the better, and Dallas String Quartet have just the right timing once again, with “Deck The Halls” being the first single from this year’s Christmas EP. The track is done the usual way the quartet perform the songs and this instrumental is up there with the actual songwriting/composition level of the number itself. The updated values of this new version of the carol is tremendously fabulous with every solitary note played by this freakishly good band of string lead musicians backed with classy guitar and percussion, easily in the same league as TSO.

DSQ seems to be on their own level, even though on par with others doing the holiday classics with an upscale effort, which “Deck The Halls” is only the latest example of as part of an upcoming EP in late November. They do the composition because it’s their own phenomenal remake instead of a cover, and that’s what DSQ bring to everything they touch. This epic version should be heard everywhere as the weeks unfold into more where this came from, it’s outstanding, as are the fine artists making up this quartet as they are the keys to it all.

The second it starts you know it’s going to be good, but if you have not heard DSQ before, you’ll be a lot more surprised at what you hear and be glad to know “Deck The Halls” can sound so incredibly cool. The work that went into this is the usual standard of theirs, but if you are new to it then get used to it because nobody takes something old and makes it this new as well as this. At least not in a long time anyway, I certainly am thrilled by this version myself, it’s absolutely stunning.

Ion Zanco is a Recording Academy voting member and artistic visionary behind DSQ. He holds a graduate degree in Music Performance and DSQ have performed for two Presidents and received global attention for media outlets such as ESP, Wall Street Journal, etc. And DSQ have also performed and they have even played with the likes of TSO on big stages. Zanco is joined by Violin players Melissa Priller and Elanor Dunbar, with guitars played by Anthony Plant, and the monster electrical rhythm section of Young Heo (Bass) and percussionist extraordinaire Efren Guzman Jr., and they rock like an incendiary inferno.

When the song starts out you don’t know where they’re going to go with it because after a short motif it starts to sound like a smooth jazz version and then it switches up to a rocking tempo and proceeds to move you back and forth with only the vocal melody really reminding you of the way the song is traditionally played by others. From there is just gets better and better as it builds on that melody and surrounds you with some of the most enormous satisfaction a holiday song can produce. This version is sublime, it’s surreal, it’s majestic and so are Dallas String Quartet.