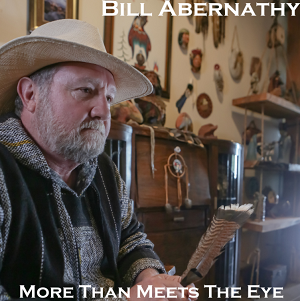 “More Than Meets The Eye” from Bill Abernathy

A pounding drum arrangement. A rousing, rebellious guitar. A man singing his truths as if he were warning a nation – the new song “More Than Meets The Eye” from Bill Abernathy is a provocative look at society. Calling out personal freedoms and actual truths, Abernathy cloaks his Americana – rock track wildly with thundering drums and 70s-rock guitar riffs. “More Than Meets The Eye” is the American gut check put to song we’ve been waiting for.

Abernathy, a Kansas City, Mo.-based singer/songwriter, has previously released the No. 1 Roots Music Charts single “Goodbye Will Never Come Again” and the politically-charged single “Cry Wolf”. Rest assured, his biting lyricism in “More Than Meets The Eye” challenges the status quo and as he calls it in his press materials, “very dangerous to have a group of self-classified elites who convinced themselves and others they know what is best for everyone. Mandating control over people will never work long term and is a sign of weak poorly thought-out ideas and concepts.”

What is exceptionally dangerous are the addictive drums in “More Than Meets The Eye”. Sounding like a herd of buffalo crossing the Great Plains, the drum fills echo a change, a revolution of sorts. Or perhaps it symbolizes the conscience, the gut feeling. Something is up, something is not adding up, Abernathy perhaps wonders between the lines. When the truths we hold so dear are cast in shadows, he sings. Abernathy’s voice is riddled with life; weathered like the sojourner and great American poets. He maneuvers his call, his warning call, if you will, with the tendencies of a rock front man. His cadence, measured and pausing to give more emphasis on certain words and lyrical lines, cautiously patterns around the moving music bed. I sensed a hint of cynicism, but I suspect he would call realism.

The guitar, a wave of nostalgia pushing it through the song’s music bed, reminded me of Foghat or even Queen to a small degree. It sort of wraps up the electrical protest movement, picks up the seventies rock scene along the way and arrives at late 80s melodic rock. It’s very cool and it’s a perfect backdrop to Abernathy’s baritone vocals. It’s almost addictive, this song. It’s just a memorable, eerie delivery. In some ways it reminded of Zager and Evans’ “In The Year 2525” fused with Paul Revere And The Raiders’ “Cherokee People”. It’s haunting and lights a fire in your belly. That pounding drum, that kick drum that beats louder than the voice in your head follows you.

“More Than Meets The Eye” lives up to its name – this song is a thrilling, protest song that once peeled away, has many layers that all add up to Abernathy’s keen eye on humanity. He has his heart and his mind on the pulse and this artistic turn, much like a landscape painting, has broad strokes of rock and folk. If you listen closely, and immerse yourself in its splendor, “More That Meets The Eye” strikes a wicked classic rock note.