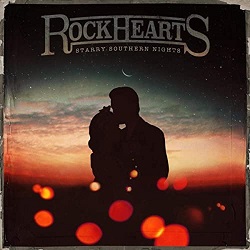 Set to a humble groove that only grows more intoxicating with every passing moment it occupies the air around us, Rock Hearts’ cover of “99 Year Blues,” originally recorded nearly a half-century ago by rockers Hot Tuna, is just the right cocktail to get this started right in their debut album Starry Southern Nights. Hitting record store shelves the day before Halloween 2020, Starry Southern Nights joins a crowded pool of awesome bluegrass debuts this season, but with songs like this one, an Osbourne Brothers cover in “Don’t Let Smokey Mountain Smoke Get in Your Eyes” and its namesake third single/video combo, it proves strong enough to put Rock Hearts on the map with critics and listeners around the globe.

While I really like the cover material that the band selected for this debut, the original content is the true bread and butter of their sound, and producer Ned Luberecki seemingly went out of his way to make sure that it got the crispest presentation possible in tracks like “Whispering Waters.” While this tune is sporting a little more punch than those around it, the decadent stylization of its grand string play never gets lost in translation – on the contrary, I would say that it comes to define the mood of the song and every second of music that follows. Detail tends to be more important to the bluegrass elite than it is any other musicians in the western pop lexicon, and if you didn’t believe this before, you will after giving Rock Hearts’ debut a half hour of your time.

“Juxtaposed” is the quintessential instrumental that every bluegrass album needs to feel complete, but it doesn’t overshadow the compositional – and specifically lyrical – depth of the next song in the tracklist, the striking and multifaceted “Don’t Take It Too Bad.” This composition can’t decide whether it’s a country-folk number or a balladic patch of ‘grass, but in either case it winds up being one of the more affective songs on the latter half of the LP. “Wake up and Smell the Coffee” is probably the only track that I would outright describe as being a little conventional compared to what the other songs consist of, but all in all, there isn’t a single piece of material here that comes even close to being what I would deem filler as a professional music critic.

Starry Southern Nights comes to an end with one last bastion of urgent swing in the form of “Stagger Lee,” which runs a little over three minutes but feels like the sort of jam that could last well over twenty minutes if performed in front of the right crowd. Bluegrass listeners of all kinds need to make a note of what Rock Hearts are up to in this debut if for no other reason than to treat themselves to some of the sweetest rookie sounds available in 2020 this fall, and if you don’t believe me now, one session spent with the eight songs in Starry Southern Nights should have you singing quite a different tune indeed.