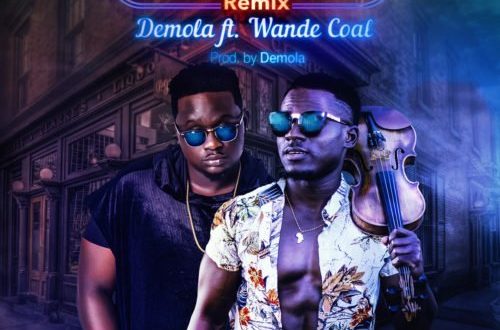 Strings and synthesizers dance in a decadent synchronicity. They’ve got a swing in their step and a bounce in the beats that they’re forging out of thin air. The percussion kicks in, and Demola’s soft serenade comes into focus next to a honeysweet violin melody that is surreal, airy and yet powerfully emotive. This is “Light Up,” the new single from Demola featuring Wande Coal, and it doesn’t waste any time before dishing out a heavenly harmony that will induce chills among Afrobeat fans in even the most cursory of listens. “Light Up” blankets its audience in a symphony of instrumental colors and textured lyrics that are delivered unto us with a graceful groove that is addictive to no end. 2019 has been an excellent year for artists within the international pop lexicon, but there’s not a doubt in my mind that discriminating music enthusiasts won’t find another track quite like this one as they scour record stores for a hot new slice of urban rhythm and seductive hip-hop swagger this June.

In the music video for “Light Up,” we get a front row seat for a lush display of the carefree lifestyle that Demola and Wande Coal enjoy as modern day rockstars of a burgeoning Nigerian indie scene. Their relaxed, uninhibited attitude is quite contagious, to put it mildly – whether you only have ten dollars in your pocket or are boasting ten million in the bank, listening to this confident beat whilst taking in the lavish imagery of the video has a way of making anyone feel as rich as the fabled tech giants of Silicone Valley. The directing is spot-on, and even with the larger than life visual spectacle taking place before our eyes, there’s no interruption in the fluidity of the music. The rhythm is nuanced by the shots that adorn our screen in “Light Up,” and if Demola had perhaps gone with a more stripped-down look in this video, I don’t know that he would have been able to yield nearly as much excitement as we make our way through these formidable waves of melody, tonality and texture.

It was only just recently that I discovered Demola’s work for the very first time, but I must say that in the brief period since coming across “Light Up,” I’ve become entranced by the concise, anti-enigmatic style of his poetry, and furthermore, the sly stylization of his anthemic beats. Wande Coal brings quite a bit to the fold here, but there’s no arguing who the biggest star in this single is. If you’re keen on mammoth pop jams and music videos that are stocked with just as much grandiosity, then you’re going to regret it if you don’t give this track a spin before the summer is out. It’s a great addition to any late night playlist, but whether you’re rocking the club until 2am or are simply looking to get entrenched in a freewheeling rhythm that doesn’t ask anything from us in exchange for memorable grooves the size of skyscrapers, “Light Up” is one indie single that pretty much has you covered either way.