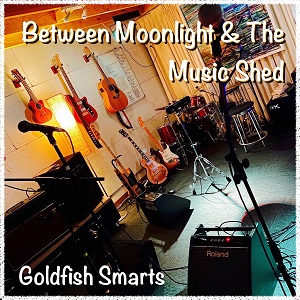 Goldfish Smarts – “Between Moonlight and The Music Shed” (EP)

Australian band Goldfish Smarts strikes back against the grain with their newest release Between Moonlight and The Music Shed. It’s interesting that the group has described themselves as rockers “arguably” past their prime, but I would certainly call this a hopeful second act as they show off their range and talent beyond any band just doing covers. A hefty group of six Aussies (7 if you count drummer Stu Freeman who plays on the opener “Butterfly Decal”), it’s harmonious to see them bounce off each other and their passion for their craft is palpable. It’s mixed and mastered perfectly and the energy that assaults you with opener “Butterfly Decal” is breathtaking. It’s a complexly written song about a simple idea: just cruising on the open road.

Therein lies one of the best hooks about the group is that they make the most with little. There’s also this really playful energy the group share as their lyrics are very tongue-in-cheek and sometimes that might extend to their performance which straddles a line between what you could call cheesy, but as the EP progresses especially with the track “Blame It On The”, you can tell these guys are actually trying to say a lot for those willing to listen, they have cited that it serves as a call to arms with current political and social unrest in Australia, which as an American is greatly appreciated considering it’s almost comforting to know that our problems are not limited to arbitrary national differences, we’re in this together.

Obviously, togetherness is embedded in the DNA of the group, what with their large number of bandmates and the way in which they bounce off and complement each other, but there’s also an openness to the listener like they’re asking you to join in the adventure and emotions they run through. “Didn’t Need to Turn Around” is one of the more obvious examples, serving as a traditional love song mixed with a knowing send-up of rock ballads that don’t really exist anymore. They’re preserving these little moments in time that are universal, a listlessness to feeling and existing and falling in love, but like the aforementioned ‘Blame’, the band isn’t unwilling to express their frustration at the system.

This all culminates in the explosive finale “In the Moment” which has the most distorted and reverbed vocals of the 5 tracks as Phil Kelly sings his soul out about the unconventional, the repetition (“living in the moment, dying at the moment”) and the desire to not be repressed or shoved into the boxes of conventionality.  It’s kind of a meta-commentary when you take into account the band’s previous thoughts on themselves as aging rockers who are giving it their all. If you’re interested in looking for something different and maybe a pause from modern pop-y glossy over-the-top music, I can’t recommend this kick-ass group, giving it and baring it all for the sake of the music. We could use more quick-witted bands like Goldfish Smarts, they’re in it for the ride.