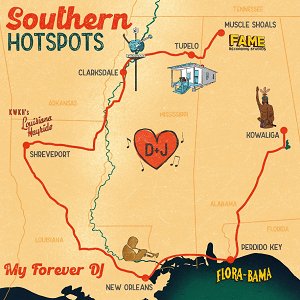 One of the hardest things that come with the territory of releasing a cover album is the immediate comparisons the artist brings upon themselves by releasing work that didn’t originate with them. It takes a special type of confidence to pull it off, and even more than that, any act releasing a cover of a song (or songs) needs a good story attached to the original to fully pull it off. With rock duo My Forever DJ, rest assured the confidence and story are excitingly present.

Upon a brief search online, you’ll notice there isn’t much on the internet about My Forever DJ. Their website’s brief bio tells you all you need to know: “Drawn together by their mutual love of music via an online dating app, My Forever DJ (aka Diane and Jeff) formed their power duo in 2018. In the summer of 2020, they chose to make music together as a way to grapple with the darkness the world was navigating as a result of COVID-19.” The scarcity of information towards the charismatic duo behind the music only lends itself stronger to their debut album, a concept album in some regards called Southern Hotspots. The listener is practically sat down directly in the back seat of Diane and Jeff’s automobile (one might picture a classic Chevy truck puttering from state to state) and immediately thrust into a road trip for the ages from one Southern Hotspot (get it?) to another, trekking the history of classic southern rock with their modern covers and sightseeing.

The backstory, placement, and confidence are all there, so what about the music? The album opens with Diane almost wistfully putting her own spin on the Cowboy Junkies song “200 More Miles” before picking up the pace and diving straight into a cover of “Kawliga.” The record as a whole weaves across influences like a car across a road map, touching base with artists both new and old. Jeff readily keeps up with Diane’s vocals and even lends some of his own to Bob Dylan tribute “Tangled Up In Blue,” jamming out on his guitar the rest of the way. The production is shakier than one might expect, but it works as an immersive experience; the duo showcases themselves recording as independently as they can, using anything from parking lots and hotel rooms to roadside attractions and beaches as their studio space. The feelings of chemistry and joy emanate from each track as Diane and Jeff welcome listeners into their mobile studio for a brief eleven tracks, sharing tales of love and togetherness on the heels of a year where most have spent time vastly apart.

Overall, one can make a fuss over the production quality or the imbalance of the album’s pacing but to do so is to miss the greater point Southern Hotspots is attempting to make. This album doesn’t exist to be the classic versions of the songs it contains. It almost shouts, “Those songs already exist, if you want to listen to those versions. These songs are ours.” My Forever DJ puts their road trip spin on classic tracks and by the end of the album, they feel wholly unique when put through such a different point of view. My Forever DJ is happy to take you along for the ride, just be sure to bring some gas money.