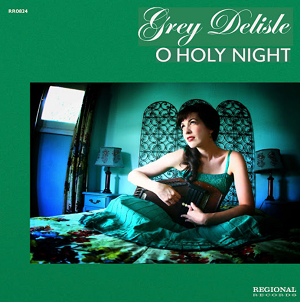 No matter your talent or your name recognition in the industry, it’s pretty hard to put a unique stamp on a song like “O Holy Night.” It’s material that just about everyone on the planet has covered at least once it seems like, and worse yet, it’s the sort of composition that polarizes people when they hear it – debating whether or not it stands up to some classic version is usually a guaranteed reaction. These aren’t problems that Grey DeLisle’s “O Holy Night” is facing, however; in her rendition of the song in a new music video and single, she’s making what could be the most accessible version I’ve heard in years.

DeLisle’s delicate vocal is what shapes the tone of this track and its music video more than anything else does. The video doesn’t have anything visually potent enough to take my gaze away from the lady of the hour herself, while the song presents us with so little instrumental fireworks to competently compete with what the singing can accomplish when left to its own devices. She’s got a divine gift in this department, and we’re getting a taste of it without any filtration to come between artist and audience in this release.

This singer/songwriter has always been one to be meticulous with the way she unveils lyrical content, but she’s all the more careful in this performance of “O Holy Night.” As she croons, there are instances in which she’ll treat a verse as though it were as fragile as an un-cracked egg, but this doesn’t result in some sort of negative contrast between her voice and the output of the instrumentation adjacent to her. There’s already a minimalism theme in place from the ground-up in this single, which successfully prevents even the most vulnerable of moments from sounding too brittle in the grander scheme of things.

The string elements here are very distant in the mix but still have a way of demonstrating their presence and contributing to the harmony when we need them to the most. I think it just goes to show that in Grey DeLisle we have a singer who doesn’t need a lot of assistance from background players to sound like someone who belongs in the spotlight, and even if this wasn’t deliberate, it’s nonetheless something I can’t help but step away with after seeing just how strong she can be in this song.

It’s not often that I like a modern take on something like “O Holy Night,” but when it comes to someone with the pipes Grey DeLisle has, trying to resist her charms is essentially futile from the start. She’s got a way with words that has carried her through numerous trends and phases in the last twenty years of her career, and judging from the ambitiousness of this new cover song, I don’t think we’ve seen the last of her work at all. DeLisle is good at what she does, and if you didn’t think so before, you will in the wake of her “O Holy Night.”

Share
Previous Christopher Watson’s “Truth Is” (SINGLE)
Next Greg Hoy – “Can You Take It?” (SINGLE)