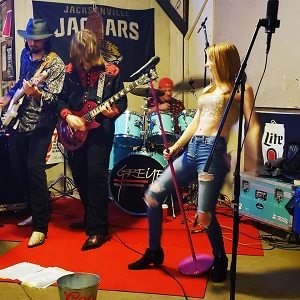 The rock gods of 2021 immediately grace us with the release of Greye’s “I Don’t Mind.” Written back in April early on in the midst of quarantine, front-woman Hannah Summer wisely avoids any direct reference to the ongoing pandemic, in favor of crafting something that can obviously be applied to the emotional heights raised due to Cobid-19, but generally ends up sounding like a more nuanced discussion about communication, even leaning into some obtuse lyricism just to drive her point home.

The song has a restless energy, only helped further by Jett Wolf’s blasting guitar that never lets you catch your breath, forcing you to endure the same kind of head-spinning unease that Summer sings about, as the happiness she once felt begins to transform into something darker and more deceptive. Like I said earlier, the parallels to Covid-19 and what the lockdown has done are unavoidable beginning with some rose-tinted flashbacks to simpler more carefree times, ending with an unambiguous realization that we won’t have any answers anytime soon. This must have been a very cathartic experience for the group to record this, as they all sound at the top of their game, no doubt equally restless from the downtime that’s been forced upon us all for nearly over a year. The mixing and mastering on the single are so smooth and powerful, you’ll find yourself ready to listen to it over and over not only for its production but also the brisk pace that makes you go “oh, it’s over already” by the time it closes.

Of the many songs I’ve heard in the last few months about the pandemic, this ranks amongst the better if only because it doesn’t define its identity by just being a “Covid” tune. Summer actually wants to say something about communication in this day and age but doesn’t stoop to cliche statements or lyrics about cell phones or screens (something I’ve heard in way too many songs in the last year) but honest to god human connection and the lack she feels. The obtuseness I mentioned earlier mainly comes from the reoccurring person(?) who has a smile that seemingly always changes from “teeth of gold” to a “toothy smile” which you could also look at as a metaphor for the world at large as we continue to miss out of the beauty it has due to the messes we’ve made.

Summer even states that “desperate times call for things to change” and the way she screams that line will crawl under your skin almost as though she’s using your body as a speakerphone. This song is filled with primal energy, the sound of rock that would now be considered vintage if only due it to its structure and a sound you’d likely hear most associated with acts like ACDC or Black Sabbath. One shouldn’t be the kind of person who says that we should be thankful the quarantine gave us material to act with, because its people’s lives we’re talking about, but Summer and company have crafted something truly timeless and marks their pension for making the most out of misery

The music of GREYE has been heard all over the world in partnership with the radio plugging services offered by Musik and Film Radio Promotions Division.  Learn more https://musikandfilm.com