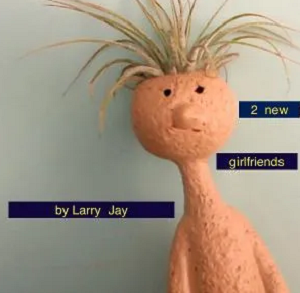 The New York born, current California resident, Larry J, is back from the operating table, with two new singles. LJ recently underwent heart surgery, and his resilience has merged with inspiration. Larry is a prolific songwriter, having placed as 1st runner up in the John Lennon songwriting award. He considers himself to be of the Pop Country genre, which is mostly accurate. At times his sound has more of a Pop Rock flavor, no pun intended, but with just enough slant on the guitar and vocals, to constitute the Country label.

“Chasin Me” is the first of the two singles, and it’s a longing for love song, with a double turn. Larry wonders why he has to chase the girl of dreams, and why she can’t pursue him, instead. He references The Bachelorette to justify his suggestion, in a bit of humorous rancor. It’s a slow tempo, with few overdubs that’s ideal for a slow dance. It shows Larry’s more romantic side, and you can find yourself immersed in the tender ambiance.

By his admission, Larry J stays in his own lane, as a musician. It goes to show what can be accomplished with a good story and true conviction, considering his aforementioned acclaim. LJ is a strong vocalist, and his voice provides the strongest hooks in the song. Wisely, his voice is placed front and center, with the music complimenting him, nicely. “Chasin Me” is a transparent, yet mildly thought provoking piece, that is likely to make the ladies, ironically swoon.

The second of the new singles is a modestly titled, “2 New Girlfriends.” Larry reels us in with what we expect to be a lascivious piece of music, and instead reveals, his two new girlfriends as Bloody Mary and Margarita. He describes his “relationship” with his two new love interests using double entendres, and foresees a long and devoted companionship. It’s somewhat typical Country and Western fare, but LJ personalizes it by framing himself as blissfully self-aware. He does an amazing job of creating a morose image of himself, sitting in a corner booth at his local watering hole.

The production and final mix on this one, is a contrast to “Chasin Me.” It’s busier, and has a slightly less disciplined arrangement. LJ seems to have something of a signature guitar tone, and it translates more effectively on “2 New Girlfriends.” If not for the offbeat subject matter, I could hear this one as the backdrop to a pickup truck commercial.  The tracking is well organized and the chorus is memorable.

All things considered, Larry J has delivered on both songs. He seems to be at a bit of a turning point in his life, and he’s handling it with humor and wit. He’s already amassed an impressive catalog and resume, which should allow his creativity to purge without restraint or externally imposed pressures. At the same time, he seems as motivated as ever to produce new material, and the results are mostly flattering for him. It seems like happiness might finally be chasing Larry J, after all.