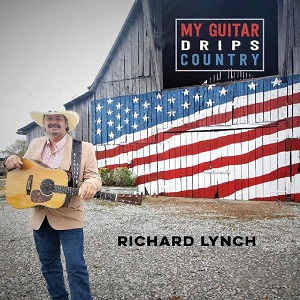 If there’s any genre of music that’s taken a fair share of kicking from recent pop culture, it’s country music. Now I’d argue that some of this is fair, we’ve certainly seen an advent of “artists” who’ve made their appearances just to capitalize on a hungry market, who’s open to any talented stranger who knows the life these fans have led, which isn’t always easy. Country is often maligned now for being about “beer, trucks, blondes, etc” however those who are more aware of its origins know that its roots are grounded more firmly in that of tragedy and hardships, which many Americans found themselves connecting to as a form of catharsis. Richard Lynch and his newest album My Guitar Drips Country will most certainly act as a cathartic outlet for many in these tough times, he even sings about it as much in the track “He’ll Make Everything Alright”, but as opposed to wallowing and digging up the cesspool of troubles countless Americans have faced over this year, Lynch aims to uplift, and to do so as entertainingly and more importantly as genuinely as possible. From its origins of being inspired by a Facebook conversation about his late friend Doug Supernaw, Lynch is a big hearted optimist and it’s felt from every single track.

It’s relatively easily accessible work, and Lynch certainly aims as to not alienate anyone who might not like Country as he does on the track “Place I Have Never Been” which sees Lynch connecting to those who genuinely don’t think they can connect to this music without having lived a life on a farm or a truck or whatever reductive statement that Lynch takes in stride and even answers back very proudly that Country isn’t a way of life, it’s like an ideology and if you open your heart up to it, it’ll change you for the better. These types of sentiments are echoed in other ways too, like in its affinity for using religion as a storytelling device. Many times Lynch comes back to the healing power of finding God as it begins with the opener “Starting Now” which details an older man turning his life around after years of wearing himself out sinning, and even in the aforementioned “He’ll Make Everything Alright” as Lynch urges us not to worry, but to find unity and that we’ve been through harder times and that with us and the lord, everything will be (obviously) alright.

Lynch as a figure is as big hearted as is on display in his work, having co-founded the Love Tattoo Foundation which specializes in assisting Veterans programs. Richard’s production is nothing to scoff at either, which despite arrangement wise, it’s nothing too complex, but then again when Country ever truly sounded as complex as say an Aerosmith song. Lynch makes the most of the basic instruments, and you can tell that having a storied career working alongside some Country greats such as Ronnie McDowell has only made his work stronger as is his clear lyricism.