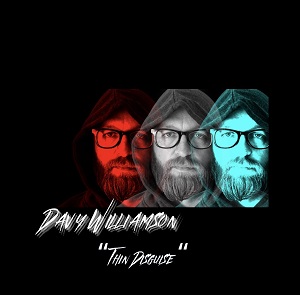 “Thin Disguise” is the first single from North Carolina’s Davy Williamson and it won’t be the last we hear from this skilled musician, performer, and songwriter working under his own name. The debut track from his first solo release is a tightly composed and well-played reminder of rock music’s lingering power to affect audiences. Emerging out of the gate with such a strong first effort puts a mark on Williamson he will not soon shake as one of the more promising solo talents in rock music over the last few years. Rock doesn’t enjoy the same commercial popularity it once knew, but there is strength in numbers and aspiring rock musicians typically band together in groups rather than solo performers out of the chute. Not so with Davy Williamson. He has the necessary confidence to carry the burdens of selling the song.

It comes across in every facet of his presentation. The guitar playing through “Thin Disguise” takes on an assortment of poses for listeners, but they always serve the song. “Thin Disguise” cannot resist incorporating some lead guitar into its musical attack but it never strikes a gratuitous note and, instead, adds an exclamation point to the performance. This climatic touch never sounds arbitrary. It is in keeping with the mood of the preceding music and reveals Williamson’s natural penchant for ending his songs in a conclusive way.

His lyrics aren’t deathless verse, but he has a clear talent for conveying his own unique sensibility through the phrasing he pursues. Williamson has few if any qualms about exposing himself through his songwriting and many listeners, like myself, will hear this as a bracing trait rather than a disqualifying one. There isn’t an extraneous word present throughout “Thin Disguise: and it mines the stock imagery of popular song just enough to help deepen its impact on listeners.

One drawback, for me, is the production. Even in lossless form, I find the mix lacking sufficient punch from the bass and drums. I want a more forceful presence supporting the guitar workout “Thin Disguise” supplies and it is possible, but the track fails following through on its promise. There’s enough here to keep the entire enterprise from suffering, but the missed opportunity here to hit listeners even harder will chagrin some.

It’s a great way to debut regardless. Davy Williamson has crafted this performance for maximum impact and there’s no question “Thin Disguise” has the potential for connecting with a wide audience. Rock music needs more entries like this these days, performers who tackle their material with a quantifiable sense of stakes rather than cookie cutter precision, and it is unreasonable to expect Williamson will continue on this path for some years to come. I expect his songwriting will continue developing, his presentation will only improve, and a full length release will soon be in the offing. He has the necessary songwriting talent to sustain longer releases and there’s no evidence of possible regression plaguing this fine effort. “Thin Disguise” is the opening lap in what promises to be an entertaining ride.