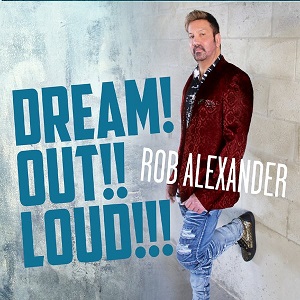 Rob Alexander – “A Song to Get Us Through” (SINGLE)

A mere dozen seconds of instrumental seduction stand between the start of Rob Alexander’s new single “A Song to Get Us Through” and the first appearance of his vocal, but it is within this time that we get our first taste of the grandiosity this track will be built upon. Lovingly excessive and yet perfectly controlled by the deliberately hesitant pacing of the band, “A Song to Get Us Through” teases us with the possibility of getting high off of the sway of the piano right out of the gate, but it soon reveals itself to be a string-driven ballad of tremendous vocal depth. Alexander followers have come to demand nothing less than this kind of a performance, but even the most dedicated of fans will probably be rather surprised at how impressive this new song is.

The lyrical narrative in this single is simple and smart; addressing the crisis that is contemporary life in the year 2021, Alexander doesn’t flirt with directness but instead makes it the primary weapon he’ll use in the war on predictable poetry. One of the best parts about “A Song to Get Us Through” is that while the verses are very even and poppy, they don’t follow such a rigid pattern as to make us feel like this singer’s pipes are going underutilized in comparison to what we already know he can do. He isn’t shortchanging anybody in this track, which puts him a step above a lot of other artists working on their third or fourth albums.

We come to the chorus in “A Song to Get Us Through” and it’s made quite obvious that the hook in this single is but an extension of the greater optimistic vibe we first encounter in the instrumental introduction roughly a minute beforehand. The style of production isn’t getting in the way of our feeling like we’ve been put in premium front row seats for what was already an intimate club performance from Rob Alexander, and while it could have been spruced up with additional instrumental elements (real and fake alike), I adore his keeping everything here as nice and neat as possible. Nothing kills a pop song like this one quite like sonic clutter, but my gut says this singer already knew that well before he ever penned this track.

For smooth melodies and a cool mood that is straight out of the south Florida lifestyle he’s made his own, Rob Alexander is the man you want to go see in 2021. Whether you have the chance to hear him play live or just take a moment to explore his catalogue starting with “A Song to Get Us Through” and Dream Out Loud, his is an artistry you won’t regret exploring – if for no other reason than the soul-affirming narrative his work implies in most every epic composition he’s recorded. Alexander is a one of a kind musician and steward of soft rock music, and he’s definitely doing his part to respond to a nation in need of good tunes and uplifting stories this year.