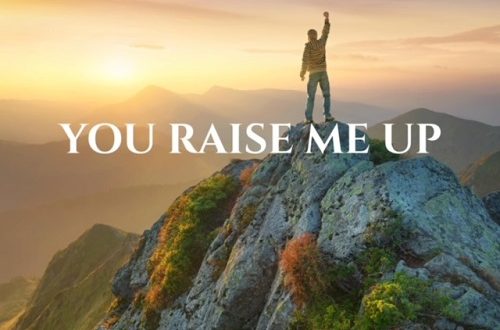 “You Raise Me Up” (SINGLE) by Steve Markoff and Patricia Lazzara

“You Raise Me Up” is given new life by flutists Steve Markoff and Patricia Lazzara in their spectacular cover. Lazzara, an award winning concert flutist and Carnegie Hall veteran met Markoff, an alto flutist, when he was a student to her. Over time as his talents tightened, their relationship transformed from that of mentor and disciple to that of colleagues releasing work together in 2017 for the album “Radiance”, again in 2019 with “Timeless” and the duo will release their newest album “Romances in Blue” later this year.

They’re joined by pianist and grammy nominee Allison Brewster Franzetti for this rendition of the hit that earned Josh Groban his first Grammy nomination back in 2005. For anyone who’s expecting the same over the top tenor/baritone we’ve come to expect from the original will surely want to check those expectations in at the door. What Markoff, Lazzaro, and Franzetti have so wisely done is strip the song back to its basic elements and even then show even more restraint in this soulful moving rendition that I’d argue is better than the most popularized iterations. Despite being composed of only three instruments, the song still retains its nearly cinematic scope, but is now honed down to an intimate portrayal that while certainly pleasant for background playings at parties and offices as I’m sure it will be played in some capacity, handing over your undivided attention is what a track like this deserves.

Because it’s an instrumental only, it can be slightly difficult to accurately describe how wonderful this song is to those who haven’t listened to it, but I’ll just begin with saying that as someone who’s never held any affinity to the original, this has completely made me reevaluate the song, if only because of the strengths of this version. Franzetti’s wonderful atmospheric piano sets the mood appropriately, and it creates an intimate setting as I’m sure many will be reciting the lyrics mentally in their own heads as I was, but there comes a point quickly where you’re just taken by the sounds of the piano before Lazzaro’s flute enters and that’s when it truly begins to morph into something special. There’s a delicacy to each note played that never becomes static as the two flutists begin weaving about with each other, Markoff taking an ambitious beautiful swing with his impressionistic flairs that for many will evoke the feelings of the bold climax of the Groban version.

One major difference is where in previous iterations it is that larger than life presence that lingers, but the trio opt wisely to retain their intimacy and camaraderie returning the song to a place not too dissimilar to where it began, a place of tenderness and an almost melancholic beauty. I can very easily see this becoming many people’s favorite or even preferred rendition and a part of me has to wonder if the choice to cover a song titled “You Raise Me Up” may carry a dual connotation as everyone involved with this beautiful piece elevates one another so complimentary. It is a true joy.

The music of Steve Markoff and Patricia Lazzara has been heard all over the world in partnership with the radio plugging services offered by Musik and Film Radio Promotions Division.  Learn more https://musikandfilm.com

User Rating: Be the first one !
Share
Previous The Valiant One – “I Know You Know” (SINGLE)
Next Rob Alexander – “A Song to Get Us Through” (SINGLE)