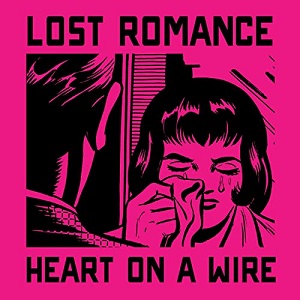 “Heart on a Wire” (SINGLE) From Lost Romance

There’s a bit of sizzle on the riffage we come across in the new single “Heart on a Wire” from Lost Romance that reminds me of the proto-grunge era in northwest punk rock, and yet this Jersey City band is about as far away from a throwback unit as it gets. Their aesthetic in this track is steeped in a lot of the same rebellious tendencies Seattle groups had some thirty years ago, but beyond the ferocity of the guitar parts, their sound is very much the product of a post-millennium take on loud, heavy rock that doesn’t get lost in the bitterness of self-absorbed poetry.

Visually speaking, the music video for “Heart on a Wire” evokes a raw surrealism that feels strangely abrasive in a couple of spots (which is rather ironic given how simple the video is by all accounts). Its imagery somehow manages to seem a bit claustrophobic in specific instances, such as the club scenes, but this would appear entirely intentional; after all, this effect has a way of pushing us into the churn of the rhythm like little else could. They might not look the part, but Lost Romance are definitely inviting some cerebral ideas into their performance technique here.

I definitely pick up on a little bit of a retro punk stylization to the main riff and vocal harmony in the chorus of this track, but I’m really hesitant to attribute the tempo to anything other than the band’s natural moxie. There’s actually a certain unevenness to the nimbleness of the groove and the messy tonal presence of the guitars in “Heart on a Wire,” but again this seems to be a deliberate feature created by the band. They’re not interested in fitting in, but in rock n’ roll this is undeniably a quality that I really respect as a critic.

For a group that just cut their debut album in 2020 of all years, Lost Romance sound like they’ve got their creative priorities in place tighter than most mainstream acts do at the moment. “Heart on a Wire” is a fabulous way of getting to know their sound and artistic trajectory as it stands moving forward, and if the energy they bring to the music video for this song is any indication as to what their true live shows are going to feel like, you can sign me up for the next concert they play.