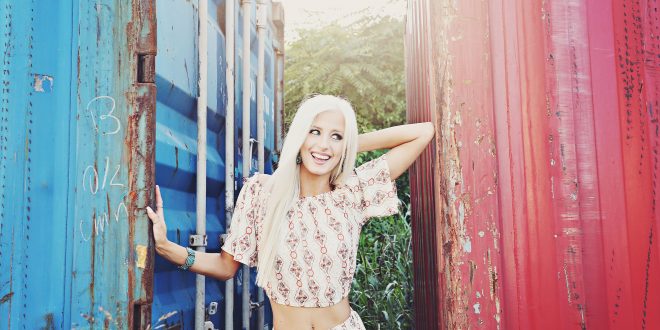 What’s most fun about listening to singer-songwriter Heather Whitney is her energy and zest for life. It really shows in the nine tracks from her debut Moving On. Spunky and full of flavor, this Texan gets the party started. Her modern country music steps in line with her contemporaries. Whitney’s country-pop songs are enjoyable and memorable.

As swiftly as she moves towards cranking up the energy to a room, Whitney strikes the right heartstrings in moving chords. With songs like “By By Bayou” the plentiful steel guitar giddy-on-ups the listener to the dance floor. What struck me most about “By By Bayou” and nearly all the songs on Moving On, were the familiarities in music beds. They have a definite formula. That’s okay. In “By By Bayou” the fast-paced tune is even more enjoyable with her play on the words “bayou.” It was unexpected. There’s a tinge of zydeco in the overall vibe.

One of my other favorites on Moving On is “Little Bit Crazy.” Again, it’s a very formulaic –modern country music bed. And, again, that’s okay. What I dug most about her voice is the determination. You can just feel it as a listener that her artistry is hungry for a shot, and at the same time, she lets her personality shine. With lyrics like “I like my rum & Coke on the rocks / I love my Johnny Lee on the jukebox” she’s certainly setting herself up for a particular modern country crowd.

Additional standout tracks include the beautiful “Man In Blue” and “Ain’t Gunna Take It.” As the tracks progress, you get to know Whitney’s personality just a bit more. I think on the surface listening to Moving On has a sense of ‘fitting-in’ to what is hot on the charts right now. But, it’s her spunk and instant rapport that may set her apart from the sea of fame-seekers. Her dry sense of humor and command behind the mic are inspiring and promising. It certainly doesn’t matter what her age is, but you get a sense she’s younger, but her life experience has prepared her well for this spotlight. She also seems like she’d be a blast to hang out with!

Some special nods to “Shut Up and Dance” and “What the Whiskey Said.” Both songs have a great chorus and are easy to sing along to. I even found myself belting out to “Shut Up and Dance!” Whitney’s enthusiasm and zest, there’s that word again, shine through and she’s simply contagious.

Overall, Moving On isn’t earth shattering, but Whitney’s star seems to be on the rise. It’s simply a fun collection of songs. The tracks are a nice introduction to those exploring country music. If you’re not a fan of country music, then Moving On, well, you should just move on. This has all the flare and goodness of modern country, with a few simple nods to greats like Loretta Lynn and just a smidge of Patsy Cline. Heather Whitney’s voice is a burst of sunshine in a bottle. You either will drink it down, or not. I chose to gulp it down, koozie and all.

User Rating: Be the first one !
Share
Previous Tia McGraff – Stubborn in My Blood
Next Crack of Dawn – Spotlight