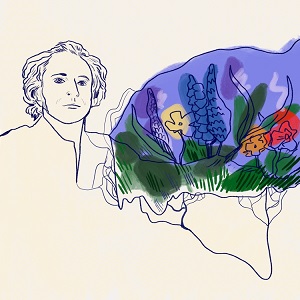 In The Garden (EP) by The Collect Pond

In The Garden by The Collect Pond is an EP to watch for, and it is the brainchild of pacific northwest artist, Danny Moffat. But the travels of Moffat reach from Bellingham, WA, to the east coast and ultimately as far as New Zealand. Moffat also did session for hip-hop/EDM producers Soca Rebel and Ray DaPlug at BMJ Studios. And he even has a background as an assistant recording engineer under former Passion Pit and Team Spirit member Ayad Al Adhamy at Diamond City Studios. Moffat sought out guidance from songwriting guru Charlotte Hatherley and drew inspiration from Brian Eno.

Moffat is obviously well travelled, so by them time you’re heard this four track EP a couple of times it starts to come as no surprise that it kicks off with “Traveling.” But to say it kicks off in mellow fashion would be an understatement, although not a bad one. It is just very-easy to pick up on the Covid-19 vibes, which the recording process began during. But it really is a melancholy slice of goodness to get things started, and it’s mostly Moffat’s voice and lyrics that compel the most. And this followed by more of the same, as it gets better throughout.

“Hieronymus Bosch” is perhaps a little more serious but not less enjoyable to listen to, with an evenness about the music and lyrics, as well as another fine vocal from Moffet. You get the feeling here that a more serious musician does exists, after hearing the slightly more playful opening track. You also get the feeling he is working up to painting his masterpiece on this track, as well. And at the end of the day it’s a delicately awesome track to say the least, with an overall beautiful ambience about it that just won’t quit.

But another direction awaits on the multi-layered “Washing Dishes,” with the lo-fi factor really showing some brilliance. You get what is going on in the sound department without feeling as if there is anything lacking there as the purpose comes out clean. The combo of acoustic and electric playing is what bring out the most in the excellent track, while the task of washing dishes is more than likely being pondered by most adults in the Covid-19 reflections. And Moffet falls short nowhere in this between his songwriting, playing and singing, as they are second to none here for what it’s completely worth.

“In Between The Seasons” is where the whole EP picks up and does not let go, winning the ears over with the excellence Moffet is clearly capable of. This brings with it a chilling vibe if you’re from the northwest, as it makes me long for the scenery, particularly in the Puget Sound area. You also really feel Moffet’s message here as it was recorded during the circumstances of Covid-19, as the song brings the EP to a close. And you don’t want the EP to end, which is the mark of a good product and its overall qualities.