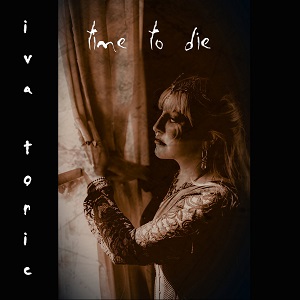 “Time to Die” isn’t a particularly cheerful song, but anyone who loves passionate music will flock to Iva Toric’s latest single. It’s the second release from her looming new album Dead Reckoning and confronts her anxieties about eventual death head-on. She’s crafted an extraordinarily dynamic musical arrangement, as well, and the various riffs and crunching grooves her band establishes fuel “Time to Die” with fearsome musical power.

The band is never predictable. The playing follows a clear trajectory during extended passages, and they aren’t at all shy about breaking off into other directions. “Time to Die” has an arrangement roaring with life. It’s one that values dramatics as well. There is a judicious use of space throughout “Time to Die” and those brief respites from crushing music are key to the song’s impact. It deepens its effects.

Dylan Howard’s drumming and Gregg Cash’s bass playing are formidable. The pairing makes its presence felt from the beginning and their playing is surprisingly fleet footed rather than slipping into cliched bash and thud. Cash plays guitar for Toric too and turns in a powerhouse performance that, unquestionably, Jim Kaufman’s production highlights. It never threatens to dominate the song.

Everything works with Iva Tonic’s voice. Anyone who thinks her voice is too light for tackling this sort of music doesn’t understand the genre. She fills every second of her performance with a breathtaking onrush of emotion that her technique allows her to shape into a fully satisfying artistic performance. It’s a perfect match for the song’s video too.

The promotional clip for “Time to Die” is cast in the mold of many modern horror films. There is a lot of foreboding imagery scattered throughout the footage, none of it the eye-rolling variety, but it shows Toric is immersed in the genre’s tropes. She transforms them into a personal vehicle capable of appealing to a wide audience while likewise finding favor with genre devotees.

Toric’s song has an inexorable mid-tempo pace. Her writing and arranging allow for exciting tempo changes and is careful to avoid any jarring changes. The intensity of the song reaches a high level early on and she isn’t inclined to provide much in the way of relief during the track. It’s hard though to deny that “Time to Die” has a welcoming sound despite its relatively dire subject matter.

Artists often choose their best and most representative material as singles. That’s certainly the case here but it’s just as likely that the remaining songs included on Toric’s Dead Reckoning album will match the same quality we’ve heard with the first two songs. There are no signs of Iva Toric slowing down anytime soon and her powerful performing instincts are every bit as visual as they are musical. She’s essentially at the beginning of a journey certain to continue for many years to come. Her talents are not the fly by night variety but, instead, the sort of creative energy we can expect to continue expanding and developing with each new release.  “Time to Die” is a powerful release in every way.