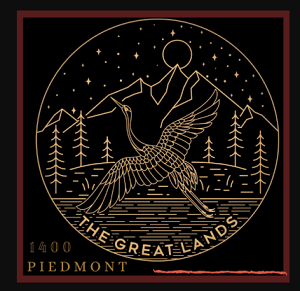 The first panic attack of my life smacked me in the mouth eighteen hours after my mother died. I napped on my couch all day after getting home. Sleep eventually became impossible when my back hurt enough and I arose from my cushioned tomb and headed to the bathroom.

I came back out into the living and reached the corner between my desk and couch. Mom is dead. The words ran through my brain and sucked the wind out of my lungs. I couldn’t take a full breath and gripped the couch. No chest pain, but I thought am I having a heart attack? Am I dying? I thought about my daughter and told myself to slow down, focused on my breathing, and forced myself to inhale long and slow. My equilibrium settled. My breathing soon followed.

I understand how art can heal after such a loss. Jordan Armstrong’s brainchild The Great Lands and its debut EP 1400 Piedmont isn’t literally about that pivotal moment, but all things flow from and into it. A solid and straightforward 4/4 beat supports the clanging guitar rave-up opening “Down the Line” before shifting into its first verse.

Armstrong’s voice has a strong nasal quality. It won’t be everyone’s proverbial cup of tea but persevere with him and rewards come. He has an undeniable soulfulness. It helps underline the wealth of specific detail in the lyrics but this song, as well as others, sparkles in part thanks to his balance between such details and well-chosen generalities.

He achieves more of an all-out rock bray with his vocals for “Except Maybe Sometimes”. The Great Lands excels locking onto a slightly ragged and garage-y vibe, the guitar and drumming vibrant throughout. Armstrong’s approach to the vocals and arrangement balances focus with a loose, relaxed mood. He isn’t concerned about hitting every note right; he’s concerned about conveying the emotion of the song.

“Jumper” has a muted trajectory before blistering guitar flexes in the song’s second half. The steadily mounting intensity never threatens to overcome listeners but, instead, resonates with deep soulfulness. It’s cut in the same mold as its predecessors barely breaking the four-minute mark. Much of 1400 Piedmont grapples with affairs of the heart as its theme and “Jumper” is no exception.

The EP’s penultimate track “Lonely Houses” is a stark shift of stylistic gears. The Great Lands forsakes the collection’s sometimes raucous electric guitar work in favor of an acoustic approach. There’s an insistent jangle in “Lonely Houses”, however, and it’s among the qualities that make it such an attractive listening experience. He opens the EP finale “One More Night (Queen)” with its chorus and this relatively unusual songwriting decision harbingers great things. It’s a passionate, brawling track at times and Armstrong’s vocal is fully invested in the moment.

The Great Lands’ 1400 Piedmont is a labor of love, without question, but it’s catharsis as well. The EP’s five songs are the sound of redemption through tragedy and Armstrong fighting back against loss through his art.