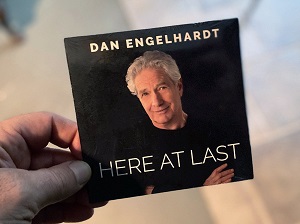 In the gorgeously fashioned “Jackie,” one of the fourteen songs available to us on the new album Here at Last from jazz artist Dan Engelhardt, melodies come slipping out of the darkness like shadows beneath the city lights, luring listeners into a haze of scattered harmonies that are dreamlike and lush (to put it quite mildly). As tends to be the case with all of the tracks here, Engelhardt put the tone of his instrumental prowess before any egomaniacal showboating, thus allowing his audience to enjoy the fruits of a complicated labor in jazz experimentation without our having to sift through any annoying filler.

There’s a wonderful conflict that develops between the string parts and the piano in “A Spirited Life” that instantly turns up the tension in the song before turning us over to a jittery ebbtide of percussion seemingly designed to extend the unsettling tone of the music without exploiting the discordant harmony any further. While wholly cerebral and a bit more complex than it needed to be (at least in my view), this kind of an approach is perhaps what makes the music of Here at Last as provocative as it is; even without lyrics, Dan Engelhardt is finding a channel of communication in every track here.

The beat could have been just a bit louder in the mix than it ultimately is in “Hymn to Florencia,” but at the same time, I can understand what the band was trying to demonstrate in keeping them in the background for this tune. Unlike “My Mothers’ Death” and “Driftwood,” “Hymn to Florencia” – and, to a lesser extent, “Sienna’s Waltz” – depend on melodic faceting to emphasize the swing of the rhythm almost exclusively, and had the percussive parts been given any more oomph, I suppose I can see where Dan Engelhardt might have run the risk of making the music feel a little too weighty in the grander scheme of things.

I would have started the tracklist off with “Clairvoyant” and “Jackie” over the opening cut, but only for the purposes of making the flow here just a bit more rigid than it is in this instance. Obviously, having a progressive fluidity definitely makes it harder to put down Here at Last once it’s been picked up for the first time, but as a lifelong jazz fan, I can also appreciate the grandeur that a slightly jagged arrangement of material would have created for this LP.

It’s admittedly a little rougher around the edges in some spots than other independent jazz releases currently making headlines stateside are, but all in all, fans of the genre should be more than pleased with what Dan Engelhardt is submitting in this brand-new album. Here at Last doesn’t ask a whole lot out of us in exchange for a wealth of harmonic gems that aren’t all that commonly found on the Billboard charts anymore, and if you’re in the mood for some jubilant jazz play, its fourteen unique songs should provide you more than enough intrigue to last the fall season.