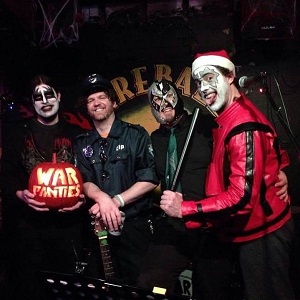 In a gust of pulsating beats and melodic fizz that will duel for our hearts across the whole of this single’s running time, “Ready 2 Git Ready” from indie harmony makers War Panties kicks into gear ready to please. Anyone within earshot of the song’s opening sonic salvo will feel the urge to synchronize their hips with the drums that greet us here, but they’re far from the lone attention-getter in this intriguing crossover song.

Pieced together from shards of hip-hop, funk, alternative rock and pop, “Ready 2 Git Ready” is a juggernaut of rhythm and textured bassline sensuality that will leave a mark on anyone who listens to it this season. War Panties have two different tracks out right now, this being one of them, and in this single, they make it all the harder for their competitors to keep pace with their craftsmanship.

No matter how many times I sit down with “Loving Sunshine Dream,” I always walk away from its melodies feeling as though I’ve just listened to a condensed symphony. There are so many different working parts assaulting us at once in the first half of the track alone, and as we get further along, it seems as though the harmonies – and the beats they’re joined to – grow stronger. This band is showing off a lot of maturity from behind the glass in this single, and even though I had a lot of big expectations coming into my review of the new War Panties release, I’m pleased to say that his attention to detail exceeded them all by itself.

The swinging groove that we begin with in either song doesn’t simmer down until we’re closing in on the midsection of the tracks, but even at this juncture, there’s a sense of urgency guiding all of the players in the studio. The intimacy between the musicians in these songs and the material they’re playing together is something to be marveled at, and I don’t get the vibe that it was born of commercial interests at all.

There’s too much passion, too much unadulterated soul in their execution of any given beat, for that to be the case. War Panties can be described in a lot of different ways, but one thing their music doesn’t qualify as is derivative. They want to hammer out something fresh every time they work together, which I should hope to say for their international counterparts this year.

“Ready 2 Git Ready” and “Loving Sunshine Dream” each cross the finish line with a little less gusto than either starts with, but despite its fading into the mist, the throttling rhythm this band has to offer isn’t something listeners will forget as the music concludes. 2022 is producing some of the smartest experimental and crossover tracks we’ve heard in the last ten years plus, and on the home front, this is undisputedly one of the top acts to watch at the moment.

For a good minute now, War Panties have been coming into the spotlight with releases both decadent and devilishly intoxicating, and in “Ready 2 Git Ready,” they remind audiences globally that they aren’t folding up shop anytime soon. They’re here for the long haul, and that’s something music buffs should be very grateful for right now.