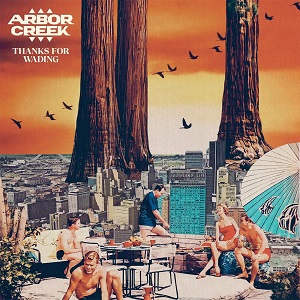 Arbor Creek’s “Thanks for Wading” (LP)

Arbor Creek’s Thanks for Wading delivers the Chicago based band’s customary stew of classic rock sounds with a modern veneer. The nine songs included on the band’s sophomore effort do not break with the template established with the band’s self-titled debut, but they do refine the strengths present on that release and expand their thematic purview without ever moving away from the tradition established on their initial release. Thanks for Wading provides moments of humor, raw-boned energy, and intelligence in equal measure.

The four piece kicks off the release with the track “Shoes”. For those encountering the band’s music for the first, “Shoes” will be a bit revelatory. The deliberate mid-tempo march of the song owes a lot to a long history of bluesy crawls preceding it and the live feel of the track gives it an additional immediacy it might have otherwise lacked. The acoustic guitar coda tacked onto the song’s conclusion feels a bit arbitrary and out of left field, but it is well played and doesn’t mar an otherwise outstanding opener.

Blues continue making its influence felt with the second track “Make Your Mind Up”. The lyrics and music alike draw from this bottomless well and Arbor Creek are canny enough to blend it with unexpected touches. The vocal melody attached to this tune strikes an interesting contrast with the song’s restrained tenor, but that restraint doesn’t hold. The final passages of the song find Arbor Creek revving up the tempo some and the track ends on a much more energetic note than its beginnings.

“George and Eddie” promises a song that’s a sort of character study, but the band serves up a rambunctious instrumental instead. The track crackles with bluesy energy, no surprise, and the exceptional guitar playing keep things percolating with spot-on enthusiasm. “Power of the Throne” drags listeners into outright blues with its slow, glacial tempo and requisite wailing guitar solo near the song’s end. These seemingly cliched moments, however, are far from it. Each time out Arbor Creek is able to put a distinctive spin on well-established formulas and produce something fresh and distinctive.

The acoustic instrumental “Moment in May” breaks with the album’s dominant sound. It doesn’t feel out of place, however, as the same rough-hewn spirit present in the earlier tracks is here as well. The jam band attributes of Arbor Creek assert themselves during the album finale “Day is Gonna Come – Day is Here” along with the expected blues stamp imprinted on the band’s compositions. There are several compelling musical turns throughout this track and the lyric gives a satisfying mix of traditional blues imagery peppered with the band’s own idiosyncratic point of view.

It’s a triumphant second album for the Chicago based Arbor Creek. They’ve avoided any sort of jinx with the release by walking a fine line between the past and present and their ability to convey the individual and collective personalities driving the band immeasurably enhances Thank You for Wading. It’s a fulfilling and entertaining musical experience you’ll find yourself returning to.