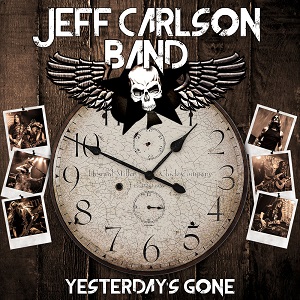 Piercing but hardly colorless, the immeasurable strength with which the opening squeal of the guitar in “Enemy Within” starts up with is intimidating and tone-setting, but it’s representative of a small dose of what the Jeff Carlson Band came to do in 2021. With rock n’ roll’s reputation in total and complete shambles, the legacy of its gods has fallen to the formerly insular scenes of America and Britain to mend and return to the place atop pop culture’s hierarchy it once controlled. The Jeff Carlson Band is Vegas’ answer to the silence made painfully loud by the pandemic of 2020, and from where I sit they could be the most dangerous band in rock to have a shot at a mainstream audience’s approval at the moment.

The instrumental aspects of “Enemy Within” are fairly simple in comparison to the impact they can have on listeners at the right volume, but I think it’s also clear that the Jeff Carlson Band could get a little more rambunctious than they are here and still sound professional. With their disciplined attack in this recording, there’s not much room for debating whether or not they’re forging something specific and unique from the get-go in their performance here – after all, were they not, I don’t think they would need to go to the trouble of being as particular with the arrangement as they so clearly are. Carlson might have his name in lights, but you can be certain that this is very much a collective effort of all four players in the studio.

That said, I don’t think I can remember when I last heard a fully independent rock singer that could be as tuneful as this man is whilst planting his aesthetics in a very rough and tumble realm of the pop lexicon. Carlson scarcely has to get too theatrical with his delivery to sound like someone who could own a packed arena just as much as he would the little punk club under the viaduct, which is a lot harder to do than you realize. His kind of duality finds the right sort of companionship in this multidimensional group of backing players he’s found himself with in this band, and being that this is just the beginning of their time together, I think the sky is the limit for their sound moving forward.

I’ve been hearing good things about this act and their scene all year long, but with the arrival of Yesterday’s Gone and this potent new single, it’s not possible to question the legitimacy of the hype surrounding the Jeff Carlson Band at the moment. They’ve got everything going for them that a rock band ideally would want in “Enemy Within,” even though they’re facing some stiff competition locally and abroad, this look doesn’t appear to be coming from a group incapable of keeping pace with their competition. On the contrary, they sound like they were born for the pursuit of passionate musicianship, and to me, this track says they’re well on their way to the next level and beyond.

The music of Jeff Carlson Band has been heard all over the world in partnership with the radio plugging services offered by Musik and Film Radio Promotions Division.  Learn more https://musikandfilm.com