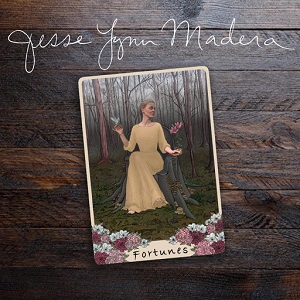 Jesse Lynn Madera’s debut studio album Fortunes brings a high degree of musical and songwriting acumen together in a stylish package. The collection is brief, only seven songs, but Madera synthesizes country, jazz, and soul with such completeness that few listeners, if any, will feel cheated by its length. She builds her songwriting vision around piano and shares production duties with Paul Redel that help frame these compositions in the best possible sonic light. She has earned considerable plaudits for her musical and lyrical skills alike, her writing drawing comparisons with Leonard Cohen, and there is a poetic sensibility underpinning Fortunes’ seven songs that set her apart from many of her contemporaries and peers. It’s an auspicious first full-length release from a talent destined for a long and memorable run.

String arrangements play a critical role on Fortunes and the opener “Dante” sets a tone. Stevie Blacke brings the same level of elegance to bear on his contributions to Fortunes distinguishing the string arrangements for artists as diverse as Chris Stapleton and Rihanna, among others. It doesn’t give the tracks any sort of neo-classical air; instead, the strings elevate individual compositions to pop art performances quite unlike much of what you hear from modern performers. Her lyrical talents are obvious and open-ended enough to allow a wide latitude of possible interpretations.

The languid pace of “Sentimental” is shorn of the opener’s dominant string arrangement and, instead, leans heavy on delicacy and atmospherics to achieve its ends. It is the first of two tracks featuring guest performers. This duet with Australian musician and vocalist Joel Taylor is born from Madera’s Los Angeles connections but his voice is complementary with Madera’s and their interplay highlights this track. The strings return for “The Door”, but they don’t have the same omnipresent effect on the song that we heard with the earlier “Dante”. Madera’s voice reminds me of a young Tori Amos – she has the same sensual physicality in her mid-range and her upper register reaches the same crystalline heights.

The second of her two collaborations comes with the album’s penultimate track “You, With the Sullen Eyes”. Her duet partner here is actor/musician John Hawkes and his stentorian delivery contrasts well with another gorgeous Madera vocal. She builds the lyric around evocative concrete imagery while keeping things open-ended in such a way listeners can relate to the track as they see fit. Madera closes the album with its title song. The orchestration from earlier songs returns and imbues “Fortunes” with muted grace that embraces tastefulness rather than grandiosity. Her piano playing, as ever, tethers the song to a elegant melodic foundation and she constructs the track as slow build that never overreaches or lapses into empty-headed histrionics.

There’s ample evidence spread over the course of this album’s seven tracks that Madera has the staying power to remain a musical and songwriting force for decades to come. She digs deep on these compositions and inhabits each one with style and a singular presence unmistakably her own.