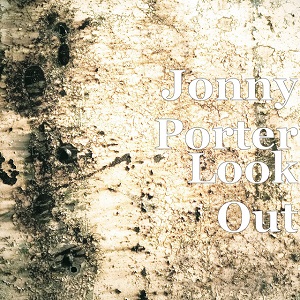 Toronto based Jonny Porter brings his multi talents to together on the Look Out EP, and with it comes six great songs to get through the times like only he knows how. And with Porter also comes a story of everything from playing on the road of success to reaching his own independence but not without the rigors of drug addiction. Look Out is a release that deals with demons of the past, present and hopeful future. Porter offers a down deep assessment of the world seen through the eyes of a seasoned artist who holds back more than reveals everything on his mind.

This is an artist of major proportion and recognition in his own right, so it’s not his first outing and the message he sends on this release is the most important thing, coming from the soul to the people. The first track “Burning Up, Coming Home” is a gritty tale of survival to kick start things with a brooding ballad. The sorrowful vocals are what grab you the most here, but always pay attention to the lyrics. “Weekend Accident” is fantastic, as it speeds things up and drives more up my alley with a killer rocker that rings of a single.

“Look Out” is where Porter spares no secrets and puts things the way they are about the weight of the world and calls your typical culprits out in the process, with an epic warning song. The slide guitar picks up on this and it is pretty-much over with a big chorus in front of it, complimented by some quiet part and building back up to a frenzy which totally describes the current political climate. What a good track this is, and luckily there is more where it came from with every track weighing in on their own strengths.

“Back To The Rats” is another big track with its own special brand of rock about it, with Porter lashing out with what seems to be all his might. This is where the collection peaks, but it continues to burn as the messages keep getting stronger with each track, and it’s worth savoring each and every one of these gems. Having said that, I find it to be my favorite track, with a few others fighting for close seconds. One of the best songs that I have heard so far in 2020, among what is a lot of great stuff.

The lyrics to “Heathen” are a bit self-loathing but they fit the title and the overall attitude is that Porter doesn’t care and turns to music instead of the daily hassles of life. The song works in every way as he takes you inside his head for a few minutes to see how he lives, and it turns out it is about how all heathens live and it’s one of the most thought provoking tracks. And this excellent EP closes with the swampy “Let Them Save Me” which contains some more slide guitar work that would turn the heads of any great blues rock player from Clapton to SRV. Every track smokes from front to back.

User Rating: Be the first one !
Share
Previous “Shaking Off The Evil” (SINGLE/VIDEO) by Moon Fever
Next “Sins Of Me” The New Single from Billy Jeter’s Upcoming Fourth Album “Shineye Landing”