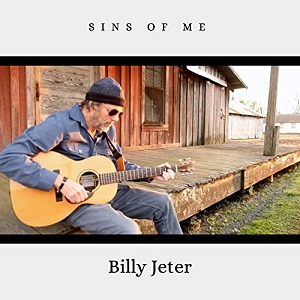 “Sins of Me” from the upcoming album Shineye Landing by Billy Jeter, is the single from what are several to choose from on his soon to be released fourth record combining his influences with his own songwriting. The point is that Jeter makes no secret of where he is coming from, and the Arkansas Delta and Ozark’s are a big part of it. The song itself is great, but all the songs on the release are great as well, and a Tom Petty influence is strongly felt. The simplicity in the songwriting is key to this music as Jeter clearly knows how to apply and use the less is more theory.

The track starts off with some bluegrass flavor and it’s a thing that keeps going behind the vocals, and the vocals serve to carry the melody along very nicely. The lyrics are autobiographical in the sense of where he’s been and where he’s going on life’s journey, but it really is the music that shines the most on this heartfelt song. And if you were to hear it without hearing the other tracks Shineye Landing it still sounds like it fits somewhere into other songs more than it stands out as a suspecting single but it works as one either way.

It’s not hard to notice how well the guitar lines to this were laid down and kept up front in the mix without burying the vocals any, and there is no questioning Jeter’s musicianship. I liked what I heard from the start, and that is usually the mark of anything great, but I also noticed how well it plays on loop, which is also the mark of a great song. “Sins of Me” is about self-reflection and realizing you can’t change your sins can’t change your destiny in a world where some people think it can.

I was also captivated by the sound of Jeter’s voice and wanted to hear more, because there is something about it and I found more of the same when I listened to more of the songs. It was the only way to familiarize more with it to know where “Sins Of Me” comes in, and I’m glad I did that because it shifted the focus back in gear and helped me appreciate the song even more through Jeter as an artist himself. It turns out I liked it enough to give Jeter some all around due props.

“Sins of Me,” while not Jeter’s best work, still breeds curiosity for what else he’s doing, so let this song lead to the rest if you haven’t already heard it. If you have heard it, I am sure you will agree on all counts. I can endorse it that much as a single from a release that should also be heard and can’t recommend doing one without the other. This is a very good track but only one example of Billy Jeter’s talent and would sell him short if not surrounded by his other great tunes to be found along with it.